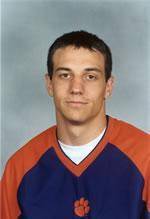 CLEMSON, SC – Clemson’s Adam Linkenauger was named ACC Indoor Track and Field Freshman of the Year as selected by the league’s nine head coaches. The freshman from Fincastle, VA, won the high jump at last weekend’s conference meet with a clearance of 7’2.25″. Linkenauger is the second Tiger to earn Freshman of the Year accolades. Ato Modibo is the only other Tiger to garner the honor, winning the 400m and helping the 4x400m relay team to victory in 1999.

Linkenauger won Clemson its sixth high jump title with his championship in 2004. He set a personal-best and NCAA provisional qualifying mark en route to his title, and became only the fourth Tiger to win the ACC meet high jump. Alston Mitchell, Ed Fern and Doug Ameigh were former ACC Champions. Mitchell won the high jump in 1955, Fern claimed the event in 1973 and 1975 and Ameigh was the high jump champion in 1999 and 2001. Linkenauger’s mark is tied for the seventh-best mark set at an ACC Indoor Championship meet and leads the league this season. He became the first high jumper since 1991 to clear the bar at 7’2″.

Linkenauger and the Clemson men’s track and field team return to action this Saturday as the Tigers host the Clemson Classic.