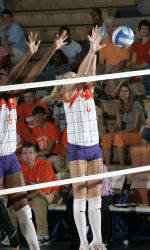 COLORADO SPRINGS, CO – Clemson volleyball players Jeannette Abbott and Brittany Ross were honored by the American Volleyball Coaches Association on Tuesday. Abbott was named the 2005 AVCA East Region Freshman-of-the-Year while Ross was an AVCA East Region honorable mention. Abbott set the school record for kills in a season by a freshman with 515 this season and earlier became the program’s fifth player in history to earn ACC Freshman-of-the-Year Honors. The native of Downers Grove, IL is also tied for second place for kills by a freshman in a single match, having posted 26 kills on two occasions this season. She also ranks second all-time in Clemson annals with 1,512 attempts in a single season.

“Our program and institution are very proud that Jeannette received this honor,” Head Coach Jolene Jordan Hoover said. “She had an outstanding freshman year and we’re excited about her future at Clemson.”

Abbott is only the second player in Tiger history to earn region Freshman-of-the-Year honors. Former setter Jessi Betcher won the inaugural award after the 1999 season.

Sophomore Ross’ honorable mention marked the 11th consecutive year that a Tiger volleyball player has been selected to the All-District team. Ross, a second-team All-ACC selection, totaled 525 kills for the 2005 season and twice tied the school record for kills in a match with 32. The outside hitter from Sunrise, FL also became just the 11th different player in Clemson history to record 20 kills and 20 digs in a single match. Ross accomplished the rare feat against Virginia Tech on Nov. 23 when she tallied 20 defensive saves and posted 26 kills.