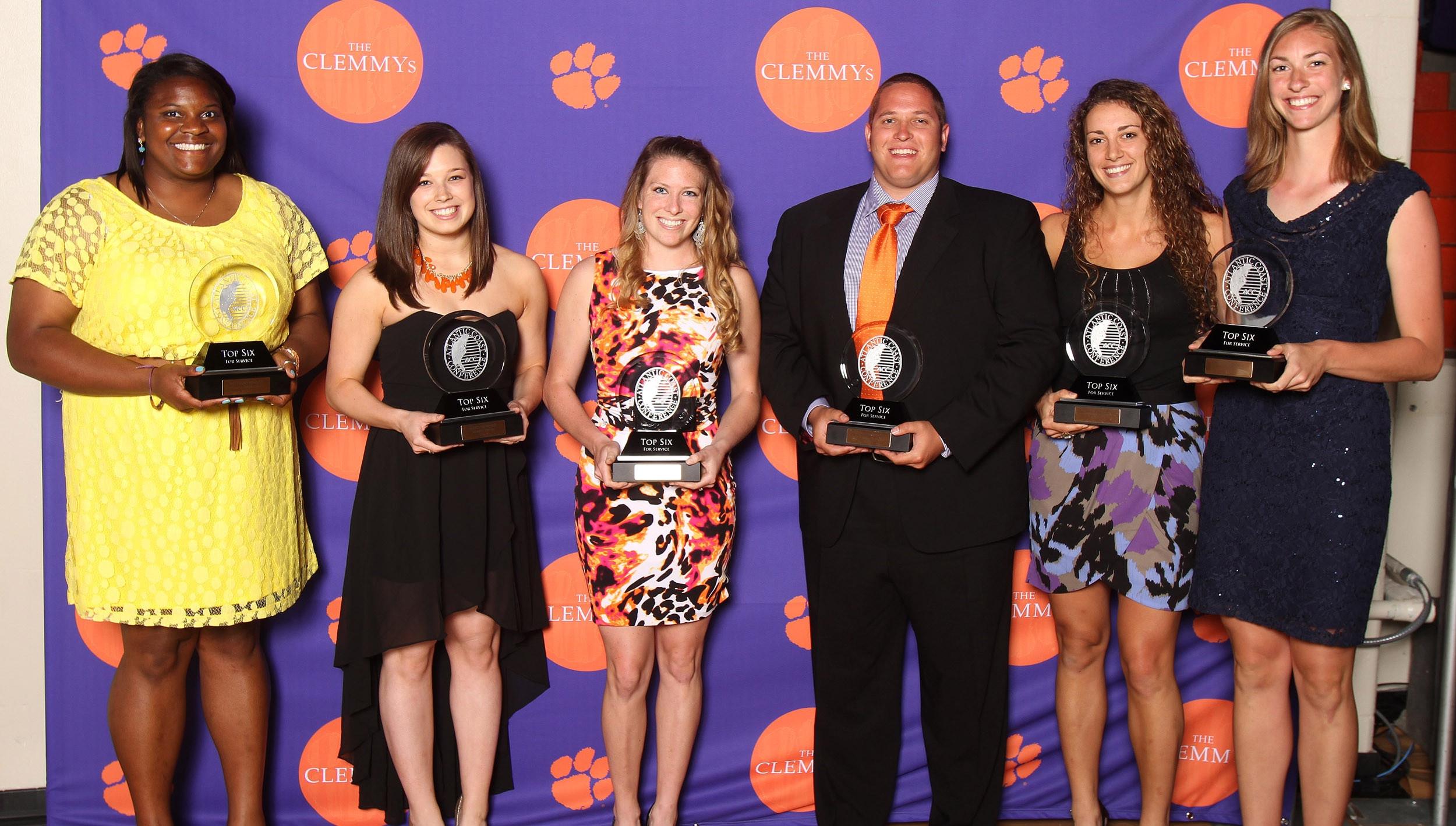 Each spring, Clemson’s community relations department nominates six student-athletes for the ACC Top Six Award for Service. This award is presented on behalf of the ACC to student-athletes at each conference school who have gone above and beyond in service in their respective communities.  To be eligible for this award, student-athletes must participate in a minimum of six different events throughout the school year.

This year’s recipients of ACC Top Six Award for Service were announced on April 15at the first annual CLEMMYs, an orange carpet event modeled after the ESPYs as a comprehensive year-end awards show encompassing athletic and academic achievement of Clemson student-athletes. Together, this group of recipients accumulated an impressive 454.69 hours and attended 80 events.

The Clemson community relations department would like to congratulate each award recipient for this honor and thank them for the time and talents they contributed to the community and to the Solid Orange Squad.  Along with a trophy from the ACC, these student-athletes’ pictures will be displayed along the wall of honor in Vickery Hall for all to see.

Clemson’s ACC Top Six Award for Service recipients for 2012-13 are:

Heather Cummings, RowingCummings was named this year’s Director of T.I.G.E.R! Pals.  This program has the old-fashioned pen-pal design where student-athletes are paired with at-risk youth who are part of a group home or after school program.  As part of this program, she creates a topic, embodied with a character trait, for the student-athlete to write about each week.  Cummings also planned the T.I.G.E.R! Pals end-of-the-year party where kids who participated in the program were able to meet their student-athlete mentors.  Dinner was provided and the student-athletes and kids attended the Clemson men’s basketball game following the gathering.  Cummings has also spoken about life as a student-athlete to middle school students on athletic tours and is an active member of the Student-Athlete Advisory Committee.

Emily Howard, DivingHoward took over as Director of T.I.G.E.R! Talk after being involved with the program for two years, and now supervises student-athlete mentors and works with school counselors.  Through this e-mail buddy system, each student-athlete is paired with a student at a middle school in the community.  Howard’s vision for this program is to provide an opportunity to communicate with children who may not have a good role model in their life and to offer open advice.  Through her study of psychology, she has also volunteered at Moses H. Cone Memorial Hospital, where she had the opportunity to work with psychiatric patients.  In addition, Howard volunteered for the Clemson diving program’s Relay for Life team and attended several public speaking events at elementary and middle schools to talk about character and what it means to Be a T.I.G.E.R!  Most recently, she organized a Clemson Tigers Run for Boston event to benefit the survivors of the Boston tragedy.

Kelsey Igo, RowingIgo is this year’s Director of the Be a T.I.G.E.R! Field Day and served as the Day of Operations Chair in 2012. This event, completely programmed by student-athletes, is for kids in the community to learn about what it means to Be a T.I.G.E.R!  Approximately 1,500 kids attend this event each year at absolutely no cost to them.  Through Clemson’s character education program, student-athletes from each team facilitate stations that demonstrate and teach the characteristics of the program: Teamwork, Integrity, Gratitude, Education and Respect.  Igo also contributed to the Be a T.I.G.E.R! Newspaper and participated in T.I.G.E.R! Pals.  In addition, the Sports Council and City of Clemson sponsored an event for the rowing team, called “Learn to Row Day”, where Igo and other Clemson rowers taught those in attendance the basics of rowing.

Alexa Rand, VolleyballConsidered the social butterfly of community service, Rand participated in more volunteer events than any other Clemson student-athlete.  Through these 25 events, she has shown her dedication to helping others, especially those in her community.  Rand introduced the Clemson community relations department to ClemsonLife by creating a way for student-athletes to interact and mentor Clemson students with special needs.  Additionally, she has organized the Olympic Village for the Special Olympics event the past two years and plans to continue with that responsibility.  Rand has been involved in many of the organization’s mentor programs: T.I.G.E.R! Talk, T.I.G.E.R! Pals and T.I.G.E.R! Read.  Rand has also spent time speaking with middle school students about college life as they have been on campus for athletic tours throughout the spring semester.

Cory Thalheimer, Men’s Track & FieldThalheimer is President of the Student-Athlete Advisory Committee.  Among his responsibilities for the organization, he handled the coordination of several community service events put on by SAAC for student-athletes to give back to the university.  Thank-A-Thon was one such event, where student-athletes contacted IPTAY Donors by phone to personally thank them for their contribution to the athletic program.  Schilletter Night was an opportunity for student-athletes to serve a meal to the student body at Clemson’s dining hall, allowing the athletes to show their appreciation for all of the students’ support throughout the year.  Thalheimer was also actively involved in the Be a T.I.G.E.R! Field Day as the Volunteer Chair.  He was responsible for making sure all student-athletes knew where to go and what to do on the day of the event, and somehow also found time to be featured as the main speaker on the promotional video of the field day.  He assisted in planning the Salvation Army Christmas party with the track and field teams, collecting money and purchasing toys for the kids.  Thalheimer has always lent his own a helping hand which has given him a reputation for being dependable, responsible and kind.

Brittney Waller, Women’s Track & FieldWaller served on the Be a T.I.G.E.R! Field Day Committee as the Promotions Chair. She was responsible for marketing the event to each school in surrounding districts, as well as businesses in the community.  Waller also participated in T.I.G.E.R! Talk, a program designed for student-athletes to mentor kids at neighboring middle schools through an e-mail buddy system, and volunteered to speak at several schools throughout the year about character. In addition, she directed an annual event with the Salvation Army that involved the entire men’s and women’s track and field team.  The track and field athletes collected toys to give to underprivileged kids in the community, along with a dinner date with the athletes and a trip to the men’s basketball game. Waller was also an active member of the Student-Athlete Advisory Committee.

Note: The individual student-athlete bios above were written by Amber Meteraud.