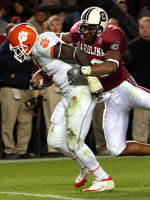 The upcoming 2006 football season is sure to be an exciting year for Clemson Football. Tommy Bowden’s team continues to improve on the field as he brings exceptional young talent and welcomes top-notch competition into Death Valley. The 2006 football campaign will continue the momentum from the last season.

Clemson University provides IPTAY Donors one of the best per seat values compared to other Top 25 football programs in the southeast.

“Our season ticket prices will be $299 for IPTAY Donors this year, which includes a $24 WestZone contribution as recommended and endorsed by the IPTAY Board of Directors,” announced Clemson Senior Associate Athletic Director for External Affairs Bill D’Andrea. “In benchmarking other Division I Institutions in the Top 25 Football Attendance, it is clear that each has a higher required scholarship donation needed to earn the opportunity to purchase season tickets.

IMG, a comprehensive sports marketing agency, found the average price per game for a 20-30 yard-line seat at Clemson, which includes the average IPTAY donation and WestZone contribution, to be $ 71.85. This is dramatically lower than other schools as shown on the chart below. For example, ACC programs such as Virginia Tech averages $ 133.75, while FSU averages $ 85.25 and N.C. State averages $ 80.71. The chart outlines a sample of our peer institutions when comparing the “True Cost” Per Seat Per Game.

“We truly examined the entire season ticket purchasing process and found that the investment for the fans at a majority of Division I football schools is more than just the cost of the ticket. It also includes a weighted donation to the athletic program.”

“After looking at numerous ways to assist the WestZone Initiative, the IPTAY Board of Directors recommended to the Athletic Department the use of the previous season ticket discount for IPTAY Donors be applied to the WestZone project,” said D’Andrea. “The $ 24 per season ticket contribution will enable the Athletic Department to continue moving forward with the next stage of the WestZone facility, which will include, when finished, the football coaches’ offices, strength facility , position meeting rooms, team room, training/rehabilitation room and recruiting room.”

“With the momentum that Tommy Bowden and his staff have built on the field, as well as off the field in recruiting, we as an IPTAY Board feel strongly that we do everything possible to assist with the completion of this tremendous WestZone facility, “said IPTAY President Don Golightly. “These funds, as well as the on-going efforts of the WestZone Capital Campaign, will assist the Athletic Department with dollars in which to continue the effort to complete the WestZone. The WestZone Initiative will not only support the Clemson football program, but assist the Total Sports Programs at Clemson, as well.”

“The IPTAY Board’s decision to recommend and endorse this funding model is in response to examining various ways for our constituency group to take an active role in the WestZone Initiative,” continued Golightly.

“With one more game than the 2005 schedule and highly competitive rates, Clemson is able to provide our fans one of the lowest true costs per game values in the country,” said D’Andrea. “Season ticket applications will be mailed to “qualified” IPTAY Donors beginning the first week of April.”

Clemson single-game prices for the South Carolina game will be $55. The Georgia Tech game (Homecoming) will be $48, while the North Carolina, NC State, and Maryland games will be $42. Florida Atlantic and Louisiana Tech single game ticket prices will be $35. “We want to provide an exceptional family environment at a competitive price,” said D’Andrea.

With new construction, strong talent, and top notch competition there has never been a better time to be an IPTAY Donor and capitalize on the value of the Clemson Football Experience.