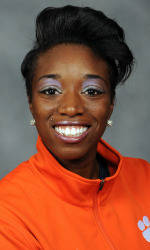 Clemson Women’s Track & Field Moves to No. 2 in National Ratings

CLEMSON, SC – The Clemson women’s track & field program jumped LSU and moved into second in the national ratings compiled Tuesday by the U.S. Track & Field and Cross Country Coaches Association (USTFCCCA). It is the highest rating for the women’s program according to the USTFCCCA. Clemson’s previous high was No. 3, both at the end of the 2001 indoor season and also in the Feb. 7 ratings last week.

Oregon is atop the national ratings for the fourth consecutive week. Clemson began the indoor season with a No. 5 rating, before moving up a spot for the Jan. 24 and Jan. 31 polls. Last week, the Tigers rose to No. 3 in the ratings before overtaking LSU this week after some solid performances last weekend.

Three student-athletes lead the nation in their respective events, including two that are tied atop the NCAA leaderboard in the 60-meter hurdles. Brianna Rollins and Bridgette Owens both ran 7.97 in the finals at the New Balance Invitational on Feb. 3. Rollins is the defending NCAA indoor champion in the event.

Marlena Wesh also leads the NCAA ranks in the 400-meter dash. The Virginia Beach, VA native clocked a time of 52.21 and won the event at the New Balance meet two weeks ago. She was a first-team All-American in the event last season. Wesh is an integral part of the Tigers’ 4×400-meter relay, which is sixth on the NCAA’s descending order list.

Stormy Kendrick is a fourth automatic NCAA qualifier for the women’s team. The junior out of Gastonia, NC clocked a 7.22 in winning the 60-meter dash at the New Balance Invitational and currently ranks third in the country in the event. Dezerea Bryant is fourth (7.25) in the 60 and tied for eighth (23.51) in the 200 with Wesh.

The women’s team has a week off from competition before returning to action on Thursday, Feb. 23 for the ACC Indoor Championships in Boston, MA.