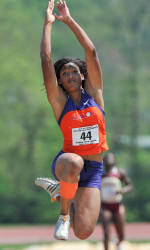 Clemson Women’s Track & Field Holds at No. 5 in the National Ratings

CLEMSON, SC – The Clemson women’s track & field team is rated No. 5 in the nation for the second consecutive week by the U.S. Track & Field and Cross Country Coaches Association. The Tigers were the preseason sixth-rated team, but moved to fifth in the April 5 computer report and stayed at the same spot for this week’s ratings.

Texas A&M, LSU and Oregon claimed the top three spots for a second consecutive week, while Southern Cal moved up two positions to No. 4. Oklahoma, last week’s No. 4 team, dropped to seventh in this week’s ratings.

Clemson has 10 individual athletes ranked among the top 20 nationally across different events. The highest-ranked athlete overall is Patricia Mamona, who holds the NCAA’s second-best triple jump mark. She jumped 45’4.25″ at the Texas Relays last weekend and is the defending NCAA champion in the event.

April Sinkler is ranked among the top 20 in the nation in three different events, including a high of seventh in the triple jump. She was the NCAA indoor runner-up in the triple jump. Sinkler’s 5’10.75″ high jump from the Florida Relays is tied for eighth on the national performance list, while her long jump of 20’4.5″ last weekend in Texas is 19th.

Three hurdlers rank among the top 10 in the nation according to the national performance list. Brianna Rollins, NCAA indoor high hurdles champion, is fifth on the 100 hurdles list after running a Clemson-record time of 12.96 last weekend in Texas. Bridgette Owens’ 13.05 from last weekend is eighth-best nationally. In the 400 hurdles, Marlena Wesh’s time of 57.49 from the Texas Relays prelims is No. 10.

Stormy Kendrick is 10th on the national performance list in the 100m dash. She debuted in the event for the 2011 season last weekend at the Texas Relays with a school record 11.23. Kendrick also ran second leg for the Tigers’ 4x400m relay at Florida, whose time of 3:35.18 is currently No. 8 in the nation.