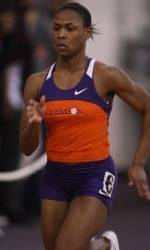 “I’m really proud of both our teams, and the way they came together this weekend,” said Lawrence Johnson, Clemson’s Director of Track & Field.  “We dedicate this performance to Barbara Kennedy-Dixon, our sport supervisor who was attending her first track meet since last season.  It was inspiring to our kids to see her up here supporting us.”

Stormy Kendrick captured her first individual ACC championship in the 60m dash.  The sophomore out of Gastonia, NC had a time of 7.28 in the final, holding off classmate Jasmine Edgerson who clocked a personal best 7.33.  Kendrick’s short sprint win was Clemson’s first in the event since Simone Tomlinson in 1998.

“Stormy was running out of her mind this weekend,” Johnson said.  “I was proud to see her accomplish some of the goals we set forth for her.  Last week she was a little banged up.  For her to come back and perform the way she did at the championship was fantastic.  “

Marlena Wesh was outstanding in the 400m dash final.  A newcomer to the Tigers this season, she set a personal best and Clemson record with a time of 53.10 en route to the victory.  Wesh’s time ranks among the top 10 in the NCAA this season, and it broke Shekera Weston’s record (53.36) that had stood since 1999.  Clemson’s last championship in the 400m on the women’s side was by Marcia Smith in 2001.

“Marlena really came alive at these championships,” Johnson said.  “She’s been on the cusp of doing that all year.  It did a lot for her spirit and her confidence.”

Kendrick was runner-up in the 200m dash, finishing ahead of Wesh in the final.  It was Kendrick’s top indoor performance in the event, as she turned out a time of 23.29.  Her time is No. 2 on Clemson’s all-time list.  Wesh’s 23.47 is third in the Clemson record books.  Edgerson was seventh, making her an individual scorer in three events.

Edgerson pulled off the upset in the 60 meter hurdles.  The sophomore from Marietta, GA clocked a personal best time of 8.17 – one of the top times nationally – to run away with the championship.  It was Edgerson’s first individual ACC title.  Last season, as a freshman, she was a part of the Tigers’ ACC champion 4×100 and 4×400 relay teams.  Edgerson’s time is No. 2 in Clemson history.

“Her run today really put her on the map with some of the top high hurdlers in the country,” Johnson said.  “This is just the tip of the iceberg for her; I can’t wait to see what her future holds.”

Bridgette Owens, a freshman from Oak Park, MI, was runner-up in the 60 hurdles.  She produced a personal best as well with a time of 8.21, which ranks No. 4 in Clemson history.  Brianna Rollins, the school record-holder and an automatic NCAA qualifier in the event, finished fourth Saturday.

Clemson closed out the meet in the same fashion as it did last winter, by winning the 4x400m relay.  The team of Rollins, Kendrick, Sonni Austin and Wesh produced a season-best time of 3:37.26 to edge North Carolina for the championship.  It marks the first time the Clemson women have won back-to-back ACC crowns in the 4x400m relay since the 1997-98 era.  Austin and Rollins were part of Clemson’s win last year as well in the event.

April Sinkler earned her third all-conference honor of the weekend, the ninth of her career, after a third-place showing in the triple jump.  The indoor senior jumped a season-best 42’11.75″.  Sophomore teammate Jasmine Brunson performed very well, putting together a personal best 41’10” jump.  Brunson’s jump was good enough for fourth overall, and it puts her No. 7 on Clemson’s all-time indoor list for the triple jump.

Danielle Curry was eighth in the shot put final.  The native of Ohio put together a top throw of 49’5.5″ to earn a point for the team.

Clemson’s men improved on their sixth-place effort from a year ago by finishing fifth at the 2011 ACC Indoor Championships on Saturday.  The Tigers finished strong by winning the 4x400m relay, their first win in that event since Clemson’s 2001 team claimed the gold medal.

The relay consisted of Jordan Rispress and La’Mont Jackson.  The team turned in a finishing time of 3:10.47, nearly three seconds better than the competition.  It was the first ACC championship of any kind for both Jackson and Rispress.

Chris Slate took runner-up honors in the 800 final.  He put together an outstanding, career-best performance to earn his first all-conference accolade.  The Wilmington, DE native crossed the finish line with a time of 1:51.01, a personal best.  Nathan Hendershot also competed in the event, finishing seventh.

Spencer Adams was third in the 60m hurdles, earning his third career all-conference accolade.  He previously was All-ACC last spring in both outdoor hurdle events.  Adams had a time of 7.94 on Saturday.  Moss, crowned the ACC’s heptathlon champion on Friday, clocked a time of 8.04 in the final of the 60 hurdles and finished eighth.

Alex Padgett earned his second career All-ACC certificate after taking the bronze medal in the shot put.  The Rock Hill, SC native put together a top throw of 56’7.25″.  Cory Thalheimer (53’0.75″) also scored in the event after placing seventh.

Michael Kopanski finished seventh in the pole vault in his first ACC championship meet.  A freshman from Dacula, GA, Kopanski cleared a height of 16’5.25″ on Saturday.  Josh Fowler had his second straight fifth-place finish in the horizontal jumps.  He hit a mark of 49’5.5″ in the triple jump, a season-best.