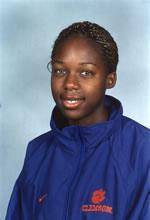 CLEMSON, S.C. – The Clemson women’s track and field team will compete at the Texas A&M All-Comers Meet in College Station this weekend. The Lady Tigers will use this weekend’s meet as the final qualifying and preparatory meet for the 2004 East Region Championships to be held in Gainesville, FL, from May 28-29. Eighteen Lady Tigers will make the trip to Texas, and will compete in 16 events.

On the track, Jessica Cousins and Randi Hinton will compete in the 200m and 400m dashes. Sudati Masasu and Patrice McMillan will represent Clemson in the 800m run, and Casey Phillips will contest the 1500m run. Four Lady Tigers will compete in the 100m hurdles, including Marquita Dortch, Jelyn Quick, Christina Smith and Silja Ulfarsdottir. Smith and Ulfarsdottir, who have previously qualified in the 400m hurdles, will also compete in that event. The Lady Tigers’ top 4x100m relay team of Ulfarsdottir, Smith, Hinton and Cousins will look to improve on its season-best and regional qualifying time of 45.37, and Clemson will also field a second 400m relay team consisting of Gisele Oliveira, Quick and Dortch. In the 4x400m relay, the Lady Tigers’ top team of Ulfarsdottir, Smith, Hinton and Cousins will take to the track to better their season-best effort of 3:37.17.

Gisele Oliveira will represent Clemson in the long jump and triple jump. Oliveira is the ACC’s and Clemson’s all-time leader in the triple jump and owns a season-best mark of 44’9.75″, and has also regionally qualified in the long jump. Allison Bradshaw, Della Clark and Moultrie will compete in the shot put, and Bradshaw, Clark and Woods will also represent Clemson in the hammer throw. Woods will double in the discus throw and Pickett will compete in the javelin throw.