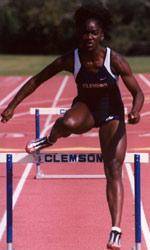 Clemson Women’s Track and Field To Compete At ACC Championships

Lady Tigers Qualify For NCAA Championships Five Lady Tigers have qualified for the NCAA Indoor Track and Field Championships to be held Mar. 8-9 in Fayetteville, AR. Gisele Oliveira and Terri Robinson each surpassed the qualifying standards. Elder posted her qualifying mark in December at the West Virginia Invitational, while Oliveira posted her best mark in January at the Kroger Invitational. Moton’s mark in the shot put was set at the Tyson Invitational, and her weight throw mark was set in January at the Kroger Invitational. Robinson set her mark in February at the Virginia Tech Challenge.

Terri Robinson ranks eighth in the nation in the long jump with her mark of 20’5″.

In the triple jump, Oliveira is currently ranked sixth with a mark of 42’6″.

Last Time Out The Clemson women’s track and field team qualified three Lady Tigers at the Virginia Tech Challenge on Feb. 9 in Blacksburg, VA. Terri Robinson and Joana Costa provisionally qualified in the long jump and pole vault, respectively, while Jamine Moton met the qualifying standards in the shot put and weight throw.

In the field events, Robinson’s mark of 20’5″ provisionally qualified her for the NCAA Championships in the long jump, while Kenya Reed and Kenya Reed finished 12th (36’9.5″).

Clemson In The ACC Three Lady Tigers lead the ACC in their events, while 11 other Clemson student-athletes rank among the top 10 in the league.

Gisele Oliveira also has a conference-best mark as she leads the ACC in the triple jump (42’6″).

Sheri Smith ranks fifth in the triple jump (40’3.25″), while Joana Costa is fourth in the pole vault.

Lady Tigers In The Record Books Nine Lady Tigers are currently on Clemson’s all-time best list. Gisele Oliveira, Katie Pickett, Terri Robinson and Marcia Smith all rank among the Lady Tigers’ all-time leaders. Costa ranks second all-time in the pole vault. She set her personal-best mark of 12’5.5″ in 2002 at the Virginia Tech Challenge.

Elder is second on the Clemson all-time best list in the 60m hurdles. She recorded a personal-best time of 8.38 at the 2000 ACC Indoor Championships. Elder also ranks fourth on Clemson’s 55m hurdles list with a time of 7.84 set in 2000.

Fields is ranked in the top five in two events. She is second on the mile list with a time of 4:43.26 set in 2001 at the Nike Fast Times Meet. Fields is fourth all-time in the 800m with a time of 2:10.42, posted at the 2001 ACC Indoor Championships. Haughton entered the Clemson record books with a time of 8.82 in the 60m hurdles. She ranks fifth on the all-time list with her mark set at the Virginia Tech Challenge in 2002.

Moton is Clemson’s all-time leader in two events. Moton set the school record of 56’7.5″ in the shot put at the Tyson Invitational in 2002, breaking her own record of 53’8.5″ set in 2001 at the NCAA Indoor Championships. Moton is also the Lady Tigers’ top performer in the 20-pound weight throw with a mark of 68’6″ set at the 2002 Kroger Invitational.

Pickett is second on Clemson’s all-time list in the high jump. She cleared 5’8″ in 2001 at the ACC Indoor Championships.

Clemson In The Rankings The Clemson women’s track and field team was ranked tied for eighth in the first poll released by Gary Verigin’s Trackwire on Jan. 15. Currently, the Lady Tigers rank 16th. Clemson was in a tie for 10th on Feb. 5 after improving on their 17th-place ranking on Jan. 29. In the Jan. 22 poll, the Lady Tigers shared 16th place.

Clemson Finishes Second At The 2001 ACC Indoor Track & Field Championships With a new coaching staff in place led by former Clemson Tiger All-ACC and All-American Marcia Fletcher Noad, the Clemson women’s track and field team finished second overall with 98 points at the 2001 ACC Indoor Track and Field Championships. After placing eighth in the 2000 meet, this is the ninth time the Lady Tigers have finished as the runnerup at the ACC Indoor Championships. They were also second in 1989, 1990, 1991, 1993, 1995, 1996, 1998 and 1999.

Jamine Moton set an ACC record in the weight throw with a provisional qualifying mark of 65’9.75″ as she claimed the 2001 individual title. Moton also set the ACC record in the shot put with a mark of 52’5.5″.

Cydonie Mothersill won the 200m dash with a provisional qualifying time of 23.58.

The Lady Tigers took three of the top four spots in the 400m dash. Marcia Smith won the ACC individual title with a provisional qualifying time of 54.45. Michelle Burgher recorded a third-place finish with a time of 55.21 and LaShonda Cutchin was fourth with a time of 56.02. Perry Fields ran a time of 2:10.42 in the 800m run to finish sixth for the Lady Tigers.

North Carolina head coach Dennis Craddock was named ACC Coach of the Year, Moton earned Most Valuable Performer and UNC’s Shalane Flanagan garnered Rookie of the Year honors. The above awards were voted on by the league’s nine head coaches.

Moton, a senior from Glassboro, N.J., was the 2001 ACC Champion in the shot put and weight throw. In the shot put, her throw of 52’05.25″ broke a 10-year-old ACC Indoor meet record of 51’04.25″ set by Virginia’s Kelly Bodiford in 1991. On the final day of competition, Moton posted a championship and NCAA automatic qualifying mark of 65’09.75″ in the weight throw. That mark broke the previous ACC Indoor weight throw record of 62’5″ set in 1998 by Florida State’s Lakeisha Mose.

Noad Leads Lady Tigers To Top Three FinishMarcia Noad led the Lady Tigers to a landmark accomplishment in the 2000-01 academic year, her first year with the program. The Lady Tigers finished third in the nation in indoor track, tied for the highest final ranking by a women’s athletic team in the school history. Clemson’s only other top three finish in a women’s sport took place in cross country in the fall of 1990 when Clemson was also third.

Clemson also ranked seventh in the outdoor track championships, the school’s highest ranking in that sport. Clemson now has 15 top seven finishes in women’s athletics and Marcia Noad recorded two of the 15 in her first year as Clemson’s head coach.