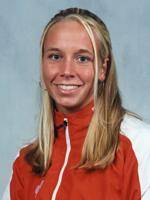 CLEMSON, SC – Three members of the Clemson women’s track and field team will compete at the UNC Last Chance Meet on Wednesday in Chapel Hill. Gisele Oliveira will vie for NCAA qualifying marks in the pole vault, high jump and triple jump, respectively.

Costa, a senior from Sao Paolo, Brazil, will compete in the pole vault. She is second on Clemson’s all-time list in the event with a career-best 12’3.5″ clearance. She was a NCAA Qualifier last year, and has cleared 12’1.5″ this season.

A junior from Maryville, TN, Pickett was an All-ACC honoree this season as she placed third at the 2003 ACC Championships. She has a season-best mark of 5’7.75″ set at the conference meet. Pickett ranks second on Clemson’s all-time list with her career-best mark of 5’8″.

Oliveira, a sophomore from Porto Alegre, Brazil, has already qualified for the NCAA Championships in the triple jump. She recorded a leap of 43’0.25″ earlier this season. Oliveira is currently tied for 13th in the nation in the event, and is Clemson’s all-time leader in the triple jump.