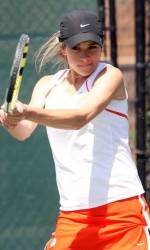 The ninth-ranked Clemson women’s tennis team will learn its seeding for the 2010 NCAA Tournament on Tuesday. The selection show will air at 5:00 pm on ESPNews. The Tigers were 22-5 in the regular season, defeated seven top-25 opponents, and reached the ACC Semifinals.

The NCAA Tournament includes 64 teams overall. The top 16 seeds host at their home facility the weekend of May 15 and 16. The Sweet 16 through the finals are held at the Dan MacGill Tennis Complex at the University of Georgia from May 20-25. The singles and doubles championships also take place at Georgia following the NCAA Team Championships, which end on May 25.

Clemson has been ranked within the top 14 teams in the nation all season in the Campbell/ITA Poll, and posted a 9-2 record in the ACC, which features seven top-25 teams, and four in the top ten. The Tigers enter as winners of 11 of their past 13 matches, with the only losses coming to #1 North Carolina and to ACC Champion Georgia Tech.

Clemson has hosted in each of the previous eight NCAA Tournaments, advancing past the first round in each. Additionally, the Tigers have reached the Sweet 16 in five of the past six seasons, and earned a berth in the Final Four in 2004 and 2005.

In singles and doubles, Josipa Bek, ranked 17th nationally, is like to earn a berth in the singles championship, which features 64 players. Bek is 27-13 this year, and has played 27 matches against ranked opponents. The sophomore from Croatia advanced to the final 16 last season, earning All-America status.

In doubles, Bek and senior Ina Hadziselimovic are ranked seventh in the most recent poll. The two are 13-2 in dual-match season, including an 11-1 mark against ACC foes. They enter on a hot streak, winners of their last 11 matches. Hadziselimovic is the school’s all-time winningest doubles player, as she has 103 career victories. Her 33 wins in 2010 is tied for a school record as well. Last season, the pair teamed up to reach the Final Eight in the doubles championship, earning All-America honors.