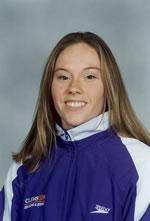 CHARLOTTESVILLE, Va. – The Clemson women’s swimming and diving team finished in fifth place at the 2004 ACC Women’s Swimming & Diving Championships, scoring 294.50 points overall in the meet that was held in Charlottesville, VA. On Saturday, the final day of competition, Janell Brodrick and Kim Cober posted sixth-place finishes in the 200 fly and the 1650 free, respectively, to lead the Tigers.

Brodrick recorded a time of 2:02.30 in the 200 fly for a sixth-place finish in the event. Brodrick’s time was a Clemson season-best mark in the 200 fly.

Four Tigers placed in the consolation finals of the 200 breast. Ashley Shafer took ninth place with a career-best time of 2:19.08, while Caitlin Bissell posted a personal-best time of 2:19.86 for an 11th-place finish. Aurelie Gresset and Sarah Cefalu took 13th and 16th place in the event with times of 2:22.56 and 2:23.57, respectively.

In the 400 free relay, the Tigers’ team of Vaughan, Kallie Deters, Nicole Kroeger and Anseeuw placed fourth with a season-fastest time of 3:26.20.

The Tiger men’s swimming and diving team will begin competition at the 2004 ACC Men’s Swimming & Diving Championships on Wednesday, Feb. 25 in Charlottesville. The Clemson women’s team will return to action on Saturday, Feb. 28 at a Last Chance Meet to be held in Athens, GA.