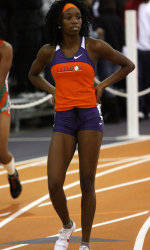 CLEMSON, SC – The Clemson women’s 2010 signing class has been rated eighth-best in the nation by Track & Field News. Defending national champion Oregon was atop the publication’s list of top recruiting classes, followed by Texas, Miami, Stanford and Southern Cal.

“This ranking says that some of the best prep student-athletes are recognizing that we have a growing track & field program at Clemson University,” said Lawrence Johnson, Clemson’s Director of Track & Field. “We’re starting to attract high-level student-athletes to our program. Once they come to campus to see what we have to offer – academics, facilities to the coaches we have in place – they are very excited.”

Johnson’s team won the ACC indoor and outdoor track & field championship in women’s track & field last season, and he and his staff have brought in a large group of newcomers to continue to build the program. A total of 20 newcomers are on the women’s roster, including 13 freshmen and seven transfers.

The most heralded recruit of the signing class is New York City native Whitney Fountain. She was the 2010 Area Athlete-of-the-Year by both the New York Daily News and New York Post. Fountain was the national high school leader in the 55m dash (6.89) and 300m dash (38.10), according to statistics from the DyeStat Elite 100 list. She also was among the nation’s top 10 in the 60m, 200m (indoor and outdoor) and indoor long jump. A versatile athlete, Fountain was a USA Junior bronze medalist this summer in the heptathlon.

Bridgette Owens and Lauren Terstappen were also highly ranked among their respective events. Owens, a freshman from Oak Park, MI, was the nation’s No. 2 high school athlete in the 60m hurdles (8.35) and seventh in the 100 hurdles (13.74). Terstappen, a native of Phoenixville, PA, was 13th on the DyeStat performance list for the indoor pole vault with a 12’5.5″ clearance.

The seven transfers into the program include Danielle Curry (Youngstown State), Briana Johnson (San Diego State), Annimari Korte (San Diego State), Misha Morris (Charleston Southern) and Marlena Wesh (Oklahoma). Borowicz and Korte will sit out the 2010-11 season for the Tigers. Johnson and Korte were All-Mountain West hurdlers for the Aztecs. Curry advanced to the NCAA Outdoor Championships this past summer in the shot put, while Wesh was a provisional NCAA qualifier in the 400m for the Sooners last indoor season.

Several of the newcomers earned experience last weekend at the season-opening Orange & Purple Winter Classic, and Johnson was impressed with what he saw from his new group.

“The limited action we had last week showed that this group is competitive,” Johnson said. “They don’t necessarily behave like freshmen. They want to be able to come into the program and contribute immediately. That’s been great for us as a coaching staff, and that’s the mentality we need from this group for us to be able to continue to get better on the ACC and national level.”