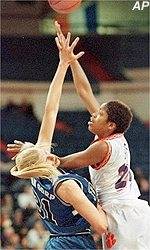 The Lady Tigers next opponent will be Tennessee in the Maui Invitational on Friday in Hawaii.

Batth recorded her double-double in just 23 minutes of play. Head Coach Jim Davis had a balanced attack as 13 players participated in both halves and 11 different Lady Tigers had a field goal for the game.

East Carolina was led by Courtney Willis with 16 points, including 12 in the second half. Rosalyn Canady and Christal Avery added 12 points apiece for East Carolina, which was playing its first game of the season.

Senior Nuria Forns added 12 points, thanks in part to 3-5 three-point shooting. She scored eight consecutive points at one juncture early in the second half. She scored those 12 points in just 15 minutes. Davis got plenty of support from the bench, as Clemson’s reserves outscored East Carolina’s reserves 37-17.

Lakeia Stokes hit her first four shots of the night and scored nine off the bench, while UCONN transfer Marci Glenney also tallied nine. She also added five assists to lead all Lady Tigers in that category.

Clemson won the rebound battle 46-37 thanks to Batth’s 12 caroms. The Lady Tigers had 22 offensive rebounds. Clemson’s defense forced 30 turnovers, thanks in part to 17 steals by the Lady Tiger defense.

Clemson jumped to a 14-4 lead early in the game behind balanced scoring. East Carolina had five turnovers by five different players in the first 4:11 of the contest, helping Clemson to that lead. A three-point basket by Stokes at the 7:45 mark of the first half gave Clemson a 32-15 lead. Clemson led at the half 44-24.

After East Carolina cut the margin to 16 early in the second half, Clemson’s offense exploded. The Lady Tigers made 15 of their first 22 shots of the second half and scored 36 points in just 11 minutes to take an 80-40 lead. Clemson coasted in from there.