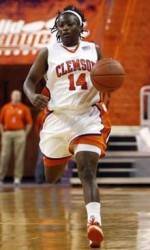 CLEMSON, SC – The Clemson women’s basketball team will take on the ninth-ranked Duke Blue Devils at 7:00 pm on Thursday, Jan. 7 in the ACC season opener. The Tigers (9-7) will take on a 12-2 Duke squad, the third top-ten team Clemson has played this season. The Tigers’ first four ACC games are all against teams currently ranked in the AP Top 25.

Clemson Quick Notes  Duke has been ranked in the top ten in 15 of the last 16 meetings between the two teams  Clemson has won all four games decided by two or fewer points and in OT this season  The Tigers are in the midst of a seven game stretch in which they play five ranked opponents.  Clemson is 5-2 at home in 2009-10  The Tigers are second in the ACC and 20th nationally with 5.5 blocks per game. Three Tigers are in the ACC’s top 12  Four different players have scored 20+ points in a game this season for Clemson  Freshman Keyrra Gillespie is second in the ACC with 5.4 assists per game and leads the ACC with 81 assists

Lele Hardy…  Will move alone into 4th place in CU history with 107 career starts today  Became the third Tiger in history to amass 1300 points and 800 rebounds  Is now ranked 12th in Clemson’s history in scoring and 5th in rebounding.  Is ranked 8th in ACC history in career steals with 337

Series Notes  Clemson leads, 32-31  The Tigers are 16-11 against Duke in Clemson  Clemson last defeated Blue Devils in the 2000-01 season when Clemson knocked off #3 Duke  Duke defeated the Tigers a season ago both in Clemson and in Durham, NC  This is the ACC season-opener for both teams  Duke has been ranked inside of the AP top-ten in 15 of the last 16 matchups between the teams  Clemson leads the all-time series, 32-31, but has dropped the past 12 overall  The Tigers’ 118-59 win over Duke in 1978 remains the 8th-largest margin of victory in Clemson history and Clemson’s 52 made field goals in that game is second in Clemson history  Clemson’s team record for FTAs (57) was set against Duke in 1990 in the ACC tournament