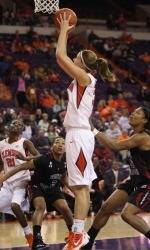 GAME NOTES Game Setup: Site: Corbett Sports CenterDate: Monday, November 21, 2011City: Greensboro, NCTime: 7:00 PMRadio: WCCP-FM 104.9; WCCPFM.com(Roy Philpott – play-by-play, – color)CLEMSON, SC – The Clemson women’s basketball team travels to Greensboro, NC to take on North Carolina A&T (2-2) on Monday at 7:00 pm in the Corbett Sports Center. The Lady Tigers (2-1) will play their first road contest of the season. This will be just the second meeting all-time between the schools, as Clemson took a 77-71 decision last season just after the new year. The Lady Tigers have shown their youth so far, as 54 percent of the team’s minutes have gone to freshmen, and 82 percent have gone to freshmen or sophomores. So far, the Lady Tigers have been successful in turning opponents over for points, averaging 23.3 points per game off turnovers. The Tigers have also been sharing the ball well, averaging 20.0 assists per game, which ranks second in the ACC. Sophomore Chancie Dunn is second in the league at 5.7 per game, and freshman Chelsea Lindsay is averaging 4.7 per game, good for fourth in the league. Freshman Nikki Dixon leads Clemson in scoring at 15.3 per game, which ranks third overall in the ACC. She was named ACC Rookie of the Week the first week of the season. She has been supported in scoring by sophomore Quinyotta Pettaway, who through three games is averaging 13.0 points per game, is shooting .567, and has pulled down 6.7 boards per contest. Shaniqua Pauldo is third on the team in scoring at 10.3 per game, as she notched 21 points in 17 minutes against South Carolina State last week. Lindsay Mason played well against South Carolina, registering nine points, eight rebounds, and five blocked shots. Clemson will play next at Furman after Thanksgiving on Nov. 28. The Lady Tigers return home on Dec. 1 for the ACC/Big Ten Challenge against Illinois at 7:00 pm.