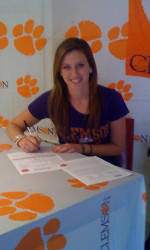 CLEMSON, SC – Clemson Head Coach J.T. Horton has announced the signing of Lauren Salazar of Santa Clara, CA and Taylor Ramsey of Milledgeville, GA to national letters of intent. They are the first two signees for Clemson’s women’s golf program that will begin play in the 2013-14 academic year. Both women will red-shirt next season, then begin play with the program in the fall of 2013.

Both were ranked among the top 60 players in the nation for the class of 2012 last summer. “I am excited about Lauren and Taylor signing with us,” said Horton. “This is the beginning of what we feel will be a strong team for the fall of 2013.”

Now in her senior year at Archbishop Mitty High School in San Jose, CA, Salazar has won two AJGA events, the 2011 Woodward Video Junior at The Greenbrier and the 2009 Lockton Kansas City Junior in 2009. Her victory at The Greenbrier featured a final round 65 when she overcame a three-shot deficit with eight birdies in the final round.

Salazar also finished third at the AJGA Junior at Oxmoor Valley and was sixth at the AJGA Steelwood. In 2010 she had five top 15 finishes in AJGA events, including a fourth-place at the Woodward Junior at The Greenbrier. In addition to her win in Kansas City, her 2009 season included a fifth place the AJGA Junior at Kingsmill Resort. For her AJGA career she has 12 top 10 finishes, eight top five finishes and the two championships.

“We are very excited Lauren will join us next August,” said Horton. “She had a wonderful summer of golf that included winning the AJGA event in Greenbrier with a 65 on the last day. Lauren has extensive tournament experience, is a great ball striker and she carries with her a lot of confidence. She is a player I expect to make an immediate impact on our program.”

Ramsey is a senior at John Milledge Academy in Milledgeville, GA. She won the 2010 Charles Howell Junior Championship with a 213 score after consistent rounds of 69-71-73. She also finished 13th at the AJGA Junior at Steelwood in 2010.

Ramsey also had a strong 2011 season with four top 15 finishes. She finished eighth at the AJGA Junior at Savannah Quarters last April, and recorded top-12 finishes at the E-Z-GO Vaughn Taylor Championship and the AJGA Hunstville Junior in July, and in the Kathy Whitworth Invitational in March.

In 2009 she had four top 10 finishes, including second places at the Chateau Elan Junior and the Charles Howell.

“Taylor is one of the future stars of this game,” said Horton. “She is a passionate, competitive person who is ready to make her mark on college golf. Taylor is a great fit for our program and is a true joy to be around. She is a very good player, and we are looking forward to seeing how successful she will be here at Clemson.”