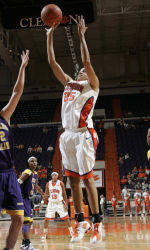 CLEMSON, SC – The Clemson Lady Tigers basketball team, which has won five of its last six games, will look to even its 2005-06 record at six wins and six losses when the Lady Tigers of Savannah State come to town. The first meeting in history between the two Lady Tigers teams will begin at 3:00 PM on Friday, Dec. 23. Fans can follow the action on 104.9 WCCP FM with Dan Scott and Kanetra Queen or by accessing livestats on www.clemsontigers.com.

Senior guard Julie Talley leads the Clemson squad with an 11.6 scoring average. She has made 36 of 74 three-point attemps for a 48.6 shooting percentage from long range, a mark that ranks seventh in the ACC and 23rd in the nation. Red-shirt sophomore Maxienne White has come on as of late, averaging 13.3 points in the Lady Tigers’ last four games to bring her season average to 9.0 per game. She has also pulled down an average of 6.3 rebounds per game this year for Head Coach Cristy McKinney’s team. Khaili Sanders, who will graduate on Thursday, has blocked 25 shots this season to lead Clemson, while sophomore point guard Tasha Taylor has a team-high 65 assists.

Scouting Savannah State Savannah State brings an 1-11 record into Littlejohn Coliseum on Friday afternoon, with the Lady Tigers’ most recent loss coming at the hands of the South Carolina Gamecocks on Dec. 19.

Shaunte Carter is Savannah State’s leading scorer with a 10.6 point per game average. Antoinette Williams has contributed 8.8 points per game, while Lashara Smith is averaging 7.4, including a team-high 13 against South Carolina. Carter also leads the Lady Tigers on the boards, collecting 5.5 rebounds per game, while Smith has a team-best 29 assists.