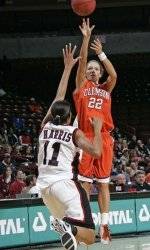 CLEMSON,SC – The Lady Tigers basketball team will play host to the UCLA Bruins on Saturday, Dec. 3 at 7:00 PM. Clemson has won its last two games for a 2-5 overall record this season, while UCLA brings a 3-2 record into Littlejohn Coliseum. Saturday’s game will be broadcast on the Clemson Tigers Sports Network with Don Munson providing play-by-play and Kanetra Queen serving as the color analyst.

Tasha Phillips has stepped up for Head Coach Cristy McKinney’s squad, totaling 40 points in the last two games to bring her season average to 8.0 per game. The senior from Campbellsville, KY also ranks second on the team with a 5.0 rebound per game mark. Fellow seniors Julie Talley and Amanda Frist lead the Lady Tigers in scoring and rebounding, respectively. Talley is averaging 11.3 points per game, thanks in large part to her 52.3% shooting from behind the three-point line (23-44). Frist has pulled down an average of 6.0 boards per game with an 8.9 scoring average, and sophomore point guard Tasha Taylor ranks second in the ACC with a 6.43 assist per game mark. She has dished out 45 in Clemson’s seven games.

The Series Saturday’s contest will be just the third meeting in history between the Clemson Lady Tigers and UCLA Bruins, with each team winning one. UCLA handed Clemson an 83-52 loss last year in Los Angeles, CA, while the Lady Tigers defeated the Bruins, 79-62, during the 1994-95 season in Anchorage, AK.

Scouting the Bruins The UCLA women’s basketball team brings a three-game winning streak into Saturday’s contest with Clemson. The Bruins defeated Georgia and Charlotte in the Loyola Marymount/ Ayers Hotel Thanksgiving Classic on Nov. 25-26 to claim the tournament crown. Senior guard Lisa Willis was named the MVP of the event after she averaged 25 points and shot 71.4% from the field in the two games. UCLA most recently won a 92-54 decision over UC-Irvine on Nov. 30.

Willis leads the Bruin squad in scoring with a 21.0 per game average. She is shooting 48.6% from three-point range while pulling down 5.8 rebounds per game. Three other players are also averaging in double-figures. Noelle Quinn, a 6-0 guard, has a 17.2 point per game average and a team-best 8.6 rebound per game ratio. She has also dished out 20 assists for UCLA. As a team, the Bruins are shooting 48.4% from the field and 74.1% from the free throw line. They are averaging 83.0 points per game while holding the opposition to just over 70 points per game.