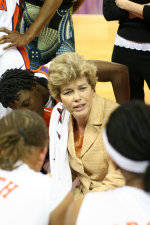 CLEMSON, SC – The Lady Tigers will play host to Wake Forest on Sunday afternoon in a game that will be televised on the ACC’s regional networks. Clemson (13-11, 2-7) and the Demon Deacons (16-5, 3-4) are scheduled to tip off at 1:00 pm at Littlejohn Coliseum.

Broadcast Notes * Monday’s game will be televised on the ACC’s regional networks – Fox Sports South, Fox Sports Florida, Comcast Sports and the New England Sports Network * Mike Hogewood will call the play-by-play and Debbie Antonelli will serve as color analyst * The game will be broadcast on the airwaves on the Clemson Tiger Sports Network * Don Munson will call the play-by-play with Kanetra Queen providing color commentary * Livestats will be available on www.clemsontigers.com

Clemson Quick Notes * Clemson defeated Wake Forest earlier this season in Winston-Salem by a 64-60 margin * Head Coach Cristy McKinney has used 12 different starting lineups this season with 10 different players earning the assignment * Sunday’s game will be Clemson’s fifth televised contest. The team is scheduled for eight broadcasts this season, the most since 2002-03 * Lele Hardy became just the 21st player in school history to score 1,000 career points, doing so with 13 points in the Lady Tigers’ game against Virginia Tech * Hardy now ranks 18th all-time with 1,034 career points * Clemson is grateful to now be into February games after a very busy January. The Lady Tigers had a 3-7 record in their 10 games during the first month of the calendar year. Five of those games were played during an 11-day stretch * The Lady Tigers are ranked 96th in the RPI, according to realtimeRPI.com; Wake Forest is listed at #34 by the same service * Lele Hardy ranks second in the ACC in rebounding with a 9.1 per game average; she also ranks third in scoring at 17.2 points per game * Hardy ranks 12th nationally in steals, through Feb. 2 games, and has scored in double figures in all but two games this season * Hardy holds the school record with a 3.03 career steals per game average * Taylor and Christy Brown both rank in the top six for career assists per game * Lele Hardy 258 career steals are fourth in school history * Taylor ranks fourth all-time with 417 career assists * Tasha Taylor graduated on Dec. 18 with a degree in sport management * The Lady Tigers won five straight games from late November to mid-December after trailing at halftime, a program first * With a 8-2 record though the first 10 games of the season, Clemson had its best start since the 2003-04 season and its best record through 10 games under Head Coach Cristy McKinney * Clemson won the Husky Classic over the Thanksgiving weekend Lele Hardy was named the MVP of the Husky Classic while Whitney Hood was selected to the all-tournament team * Clemson has nine players from the state of Georgia on its roster, which is tops in the nation for a school in a different state, according to a survey by the SID at George Mason

Series Notes * The Lady Tigers have won five straight games against Wake Forest to improve to 46-12 in a series that dates back to 1977. * Clemson defeated the Demon Deacons in Winston-Salem on Jan. 18 for a win against Wake Forest already this season. * The Lady Tigers won the first ever match up by a wide 108-53 margin and defeated the Demon Deacons twice last season. * Clemson also holds a 24-5 advantage in games played at Littlejohn Coliseum. * The Deacs last win over the Lady Tigers was an 82-70 decision during the 2005-06 season.