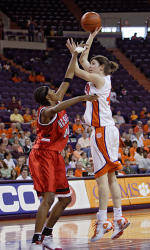 CLEMSON, SC – The Clemson women’s basketball team (6-9, 0-1) will open its home ACC schedule on Sunday, Jan. 8 against the Yellow Jackets of Georgia Tech (11-2, 0-1). The Lady Tigers are coming off of a loss to #5 North Carolina, while the Yellow Jackets were defeated by Miami in their first conference game. The teams will take to the court at 3:00 PM. Fans can follow the action on the Clemson Tigers Sports Network with Don Munson and Kanetra Queen or by accessing livestats at www.clemsontigers.com.

Amanda Frist has scored in double-figures in each of the Lady Tigers last three games to bring her season average to 9.5 points per game. The senior from Fountain Inn, SC is also averaging 5.3 rebounds per game, a mark that ranks second on the team. Maxienne White continues to lead Head Coach Cristy McKinney’s squad on the boards with a 6.5 average, while Julie Talley is still atop the scoring column with a 9.9 point per game ratio. Sophomore point guard Tasha Taylor ranks second in the ACC for assists, as the Columbus, GA native has dished out 96 in Clemson’s 15 games. Since returning to the starting lineup after an ankle injury, Tasha Phillips has averaged 11 points to raise her 2005-06 mark to 9.0.

Scouting the Georgia Tech Yellow Jackets The Yellow Jackets of Georgia Tech bring an 11-2 overall record into Littlejohn Coliseum on Sunday afternoon. However, Georgia Tech was defeated by Miami, 75-63, in its ACC opener on Jan. 5. The team’s only other loss was by just six points to then-ranked #17 Georgia on the Bulldogs’ home court.

The Yellow Jackets have three players who average double figures, led by Chioma Nnamaka with 12.0 points per game. Stephanie Higgs and Janie Mitchell having scoring averages of 11.5 and 11.2, respectively. Mitchell also leads the Georgia Tech squad on the boards, pulling down 7.7 rebounds per game, while Jill Ingram has a team-best 45 assists.

The Yellow Jackets are averaging 66.0 points per game in their 13 contests so far this season, while holding their opponents to just 49.7 per game. They are shooting 71.1% from the free throw line, having been to the foul line 277 times. Georgia Tech is also converting 33.9% of three-point shots, led by Nnamaka’s .415 mark (27-65).

The Series Sunday’s game between Clemson and Georgia Tech will be the 54th meeting in history. The Lady Tigers hold a 40-13 overall advantage in the series score and also lead, 21-4, in games played in Littlejohn Coliseum. The two teams split last years’ contests, with each school winning on its home court. The Yellow Jackets defeated Clemson by a score of 53-48 in Atlanta, GA, while the Lady Tigers won a 58-49 decision in Clemson, SC.