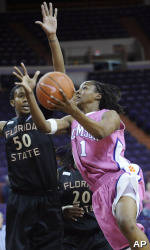 Broadcast Notes * Thursday’s action will be broadcast in the upstate on WCCP-FM (104.9) following Bi-Lo Tiger Calls with Oliver Purnell. * The game can be heard in its entirety on WCCPFM.com * The game will be video streamed on ACCSelect.com * Livestats will be available on NC State’s athletic homepage.

Clemson Quick Notes * Thursday’s game will be the regular season finale for the Clemson women’s basketball team * Clemson Head Coach Cristy McKinney will be coaching in her first game against her alma mater since the January passing of long-time NC State coach Kay Yow * McKinney (formerly Earnhardt) was a four-year letterwinner under Yow from 1975-79 * McKinney has used 13 different starting lineups this season with 10 different players earning the assignment * Lele Hardy became just the 21st player in school history to score 1,000 career points, doing so with 13 points in the Lady Tigers’ game against Virginia Tech * Hardy now ranks 17th all-time with 1,097 career points * Hardy’s 274 career steals are third in school history and her 92 in 2008-09 rank fourth most for a single season * The Lady Tigers are ranked 104th in the RPI, according to rpiratings.com * Lele Hardy ranks fourth in the ACC in rebounding (8.7 rpg) and scoring (17.0 ppg) * Hardy ranks sixth nationally in steals, through Feb. 22 games, and has scored in double figures in all but three games this season * Hardy holds the school record with a 3.08 career steals per game average * Taylor and Christy Brown both rank in the top six for career assists per game * Taylor ranks fourth all-time with 420 career assists * Tasha Taylor graduated on Dec. 18 with a degree in sport management * The Lady Tigers won five straight games from late November to mid-December after trailing at halftime, a program first * With a 8-2 record though the first 10 games of the season, Clemson had its best start since the 2003-04 season and its best record through 10 games under Head Coach Cristy McKinney * Clemson won the Husky Classic over the Thanksgiving weekend Lele Hardy was named the MVP of the Husky Classic while Whitney Hood was selected to the all-tournament team * Clemson has nine players from the state of Georgia on its roster, which is tops in the nation for a school in a different state, according to a survey by the SID at George Mason

Series Notes * NC State has been the most frequent opponent for the Clemson women’s basketball program over its history. * The two teams have met 74 previous times on the hardwood with the Wolfpack leading the series 46-28. * The Lady Tigers have won just six games in 29 tries in Raleigh and fell to NC State, 65-52, in their 2006-07 trip to Reynolds Coliseum. * The Wolfpack claimed the regular season match-up a year ago but Clemson responded with an overtime victory in the first round of the ACC Tournament, scoring the first win for Head Coach Cristy McKinney over her collegiate team.