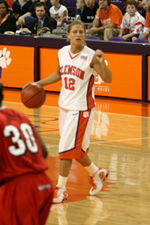 CLEMSON, SC – The Clemson women’s basketball team will begin play at the Memphis Lady Tiger Classic in Memphis, TN on Friday, Nov. 25. The Lady Tigers (0-4) will face the 2-0 Belmont Bruins at 9:00 Eastern Time on the first day of the four-team tournament. Clemson will then play either Memphis or Austin Peay on Saturday.

The Lady Tigers are led by seniors Amanda Frist and Julie Talley. Talley is averaging 10.8 points per game and is shooting 54.5% from behind the three-point line. Frist has a 9.0 point per game average while collecting 6.5 rebounds per game as well. Red-shirt sophomore Maxienne White had a career night against Ole Miss on Monday, totaling 22 points and 10 boards to bring her season averages to 8.5 points and 6.3 rebounds per game.

Belmont has defeated Eastern Kentucky and Tennessee State so far in the 2005-06 season and has three players averaging double figures in the two contests. Alysha Clark leads the way with a 28.5 average while Jenny Conkle has a 13.5 point per game mark and Tonisha Jones is not far behind with a 13.0 point per game average. Clark also has a team-best 14.0 rebound per game ratio.

The Lady Govs of Austin Peay fell in their only game so far in the 2005-06 season, as they suffered a loss to Troy University on Nov. 18. Ashley Haynes had a team-high 20 points in the effort, and Kellea Reeves and Amber Bacon each contributed 12 points for Austin Peay. Haynes also led the team with nine rebounds, while Saundra Hale collected six assists.

Memphis, who has dropped contests to Louisiana Monroe and Arkansas, is led by Tamika Butler, who is averaging 15.0 points in the Lady Tigers’ two contests. Ashley Howard has recorded 17 rebounds for an 8.5 per game average.

This weekend’s games will be aired on WCCP (104.7 FM) with Dan Scott providing play-by-play from Memphis. The Lady Tigers can also be heard on the Internet on Yahoo! radio.