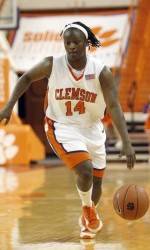 CLEMSON, SC – The Clemson women’s basketball team will play host to the South Carolina Gamecocks at 7:00 p.m. on Thursday night. The Tigers hold a 21-6 advantage all-time in games played at Clemson against the in-state rival.

Clemson Quick Notes  The Gamecocks are the third straight in-state team Clemson has faced this season and the third of six on the 2009-10 slate.  Lele Hardy is one of only six 2009 All-ACC players returning league-wide  Lele Hardy 297 career steals are second in school history and she can become the 15th player in ACC history to reach 300 career steals.  Hardy is also first among all active ACC players in career double-double with 24. She has posted one in each of the first two games of 2009-10.  Hardy holds the school record with a 3.16 career steals per game average   Freshman Keyrra Gillespie had 10 assists in her career debut against Furman and had a career-best 13 points against College of Charleston.  The Lady Tigers were predicted to finish 11th in the preseason ACC poll  Cristy McKinney is in her fifth season at the helm of the Clemson women’s program