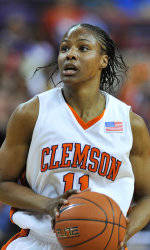 GREENSBORO, NC – The Clemson women’s basketball team opens ACC Tournament action on Thursday night at 8:00 pm against NC State. The Tigers (13-17, 4-10 ACC) have advanced in two consecutive ACC Tournaments, including in 2008 against the Wolfpack (17-12, 7-7 ACC).

Series Notes (NCSU)  This is the 77th meeting between the schools all-time, most for Clemson against any opponent  The Tigers and Wolfpack have met 15 times in the ACC Tournament, with NC State holding a 10-5 record; Clemson won the most recent ACC Tournament meeting, a 65-60 overtime win in 2008  Clemson and NC State have met in every even year of the ACC Tournament since 2002  The Tigers defeated NC State in the most recent meeting in late January, little more than a month ago  Clemson head coach Cristy McKinney was a four-year letterwinner at NC State under the late Kay Yow  McKinney, then Earnhardt, scored 1,359 points and pulled down 600 rebounds in her four-year career, and was a member of NC State’s first ACC championship team  She still hold freshman records for free throws made (135) and scoring average (17.5 ppg)

Clemson ACC Tournament Notes  The Tigers have won their first round game in each of the last two seasons  Clemson ousted 5-seed Georgia Tech as the 12 seed last season before falling to 4-seed UNC in the second round  The Tigers won in 2008 against Kay Yow and NC State as the 9-seed, 65-60 in OT, but fell to #1 seed UNC in the following game  Clemson has won two ACC Championship titles: 1996 and 1999; The Tigers have played in the finals six times  In 1999, Clemson played NC State in the first round on their way to an ACC championship  Clemson has recorded 12 upsets in the ACC tournament in its history

Clemson Quick Notes  Clemson won four of its final five home games this season, earning a winning ACC home mark for the first time since 2003-04  The Tigers are third in the ACC and 29th nationally in blocks per game at 5.0 per game. Their 151 so far ranks 2nd in CU history.  Clemson has played 9 ranked opponents this season, and seven of their first ten conference games were against ranked foes. Clemson’s SOS is rated 15th nationally  Clemson is 7-1 in games decided by five or fewer points and in OT this season, including three in the extra period  The Tigers rank 5th in the ACC in Offensive Rebounds/Game  Four different players have scored 20+ points in a game this season for Clemson, led by Pauldo, who has done it 4 times; Hardy’s 28 at VT are the most for a Tiger this year  Lele Hardy (See Pages 8-9)…  Was named 2nd-team All-ACC for the 2009-10 season  Is 4th nationally at 3.6 steals per game  Is ranked 2nd in the ACC in rebounding, 2nd in steals, and 8th in scoring  Ranks 5th in school history with 1558 points and 3rd in rebounding with 931  Is ranked 5th in ACC history in career steals with 394 and ranks 21st in NCAA Division-I history  Is one of only three players in school history with 1500+ points and 900+ rebounds  Sthefany Thomas ranks 6th in CU history in career FT% and leads CU in 3FG%  Lindsey Mason ranks 5th in ACC play in blocks/gm  Shaniqua Pauldo is Clemson’s second leading scorer and third leading rebounder  Christy Brown ranks 10th in Clemson history in career assists with 359