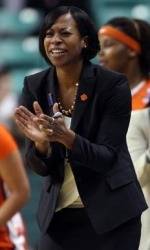 This is the first season that women’s teams will play 16 conference games. Eight ACC teams made postseason play last season, including six who made the NCAA Tournament and finished ranked in at least one poll.

Fifteen of the 27 games will be at home, highlighted by a Friday night television showdown with Duke on Jan. 27 at 8:30 pm. Clemson also plays on TV the following week as they take on Virginia Tech in Blacksburg on Feb. 3.

Clemson opens the season with an exhibition against St. Augustine’s on Nov. 4. The Lady Tigers then open with three straight home games, including in-state rival South Carolina on Nov. 17.

Clemson will play at North Carolina A&T and Furman prior to hosting Illinois for the Big Ten – ACC Challenge.

Notable road trips for the Tigers include a trip to Oakland (Mich.) on Dec. 9 before finals, and then to Big East member Providence on Dec. 21.

In total, there are 12 games against teams who made postseason play last season.

Itoro Coleman will be at the helm for her second season, after the Tigers went 10-20 a season ago in her inaugural campaign.