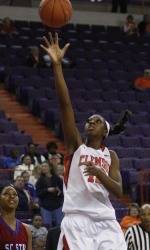 Game Notes Game Setup:Site: Littlejohn Coliseum (10,000)Date: Thursday, November 17, 2011City: Clemson, SCTime: 7:00 PMRadio: Clemson Tiger Sports Netowrk (Don Munson – play-by-play, – color)Webcast: TigerCast at ClemsonTigers.comTickets: 1-800-Clemson, or $6 at the door Promotions: Solid Orange Game; Each fan who brings in two canned goods receives free entry to the game. CLEMSON, SC – The Clemson women’s basketball team takes on South Carolina on Thursday at 7:00 pm in a Solid Orange contest at Littlejohn Coliseum. Both teams enter the matchup at 2-0 overall. Clemson is coming off an Lele Hardy had 22 against Wake Forest. Shaniqua Pauldo put up 21 points against South Carolina State in just 17 minutes of play, and at 14.5 points per game is second on the team in scoring. Chancie Dunn leads the team and is second in the ACC with 6.5 assists per game, while freshman Natiece Ford is the team’s leading rebounder at 6.5 per game.Sophomore Quinyotta Pettaway has hit double-figures in each of the first two games, as her previous career high was four points entering the season. South Carolina is led in scoring, rebounding, blocks, steals, and made field goals by Ashley Bruner, who is averaging 14.5 points and 7.0 rebounds per game in two games so far.  Clemson features one of the youngest rosters nationally, with six freshmen, two sophomores, and two seniors. The freshmen and sophomores have combined to score 119 of 155 points and freshmen have played 218 of 400 possible minutes.