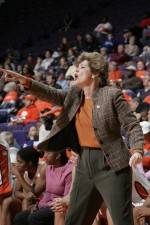 CLEMSON, SC – Head women’s basketball coach Cristy McKinney has announced that five players have signed National Letters of Intent to join the Clemson program next year. The class, which includes Whitney Hood, Stefany Thomas, Bryelle Smith, Jasmine Tate and Kirstyn Wright, has been ranked 22nd in the nation according to The All Star Girls Report.

“We are really excited with the student-athletes in this class,” McKinney said. “We have signed players at every position and some will challenge for starting positions right away. My staff is to be commended for their efforts in signing this quality class. It was a true team effort.”

Hood, who was the ASGR’s 70th-ranked player, is a 6’2″ forward from Meridan, MS. She comes from an athletic family as both her parents and her brother have played collegiate basketball. Hood has been an all-state selection at Meridan High School the past two seasons, leading the team to the state finals in 2005 and 2006. She scored 35 points and collected 23 rebounds in Meridan’s first game this season.

“Whitney is a versatile post player,” said McKinney. “She can be productive in the low block but also has a nice shooting touch from the perimeter. She will be a really good player in the ACC.”

Thomas, a 5’9″ guard, has played on the Argentinean under-18 national team. She helped guide the Argentineans to a third-place finish at the FIBA U18 World Championships, as she posted 31 points in the bronze medal game. Thomas was also a member of the AAU under-16 national championship Orlando Comets. She plays for Wesley Chapel High School in Wesley Chapel, FL.

“Stefany is a good shooter and slasher,” McKinney commented. “She is a smart, polished player with big-game experience.”

Smith is a 5’8″ point guard from Raleigh, NC. She led Cary Academy (NC) to its first ever conference title last season and was selected to the all-conference team. Smith averaged 14 points per game along with five assists per game last year to help Cary post a 27-5 overall record.

“Bryelle has shown good leadership qualities and is a true point guard who will give us depth at the position, as well as push the players already in our program,” said McKinney.

Tate, a 6’1″ forward from Birmingham, AL, was ranked the #7 senior in the state of Alabama for the upcoming season. She averaged 14 rebounds, 15 points and three blocks per game last season and was a member of the 2004 state champion Wenonah High School team.

“Jasmine is a true power forward who is a tremendous athlete,” McKinney said. “Being ranked seventh in her state says a lot about her ability. There are a lot of talented players in Alabama.”

Rounding out the class is Wright. She is a 5’11” guard from Stone Mountain, GA who attends Stephenson High School. She was named her team’s most improved player in 2005, while helping Stephenson to the semifinals of the 2006 state championships.

“Kirstyn is a swing player who can play the two or three position,” said McKinney. “She really exploded this summer and showed her ability to take the ball to the hole. She has always been a great shooter.”