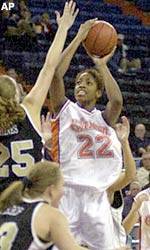 Clemson was led in scoring by Chrissy Floyd with 20 points and Erin Batth had 16 points and nine rebounds for the Lady Tigers.

Clemson is ranked 18th according to the latest Associated Press poll. Maryland is unranked this week.

From this point, Clemson outscored Maryland 11-2 in the final 3:30 to take a 38-26 at intermission. In this Clemson run, Nuria Forns scored six points and Chrissy Floyd added five.

Clemson had a 51-42 lead with 12:10 remaining in the game. From this point Maryland scored nine unanswered points and tied the score 51-51 at the 7:45 mark . DeeDee Warley had four points in this Terrapin run.