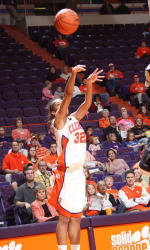 Deja Foster and Alex Montgomery each posted 24 points in leading the Yellow Jackets. The 24 points were a career high for Foster who also notched her first career double-double with a team-best 11 rebounds.

Iasia Hemingway totaled 15 points and 10 rebounds to record a double-double on Sunday as well. Georgia Tech is now 19-8 for the year with a 6-6 mark in conference play.

The loss was the worst margin of defeat for Clemson this season and dropped the Lady Tigers to 13-15 overall with a 2-11 record against ACC foes.

Sunday was the final regular season home game for the Lady Tigers and senior Tasha Taylor was honored before the game. The native of Columbus, GA has started 91 games and played in 114 over her career. She ranks fourth in program history with 420 career assist and has totaled 841 points as a Lady Tiger.

Hardy scored 15 of her 17 points in the second half and added six rebounds, three steals and three assists to her stat line. Meanwhile, with her 11 points, Campbell posted double-figures for just the second time this season. The junior guard has seen limited action since suffering an injury early in the fall.

The teams combined for 51 field goals on Sunday afternoon in contrast to the defensive struggle between the two schools earlier this season. Georgia Tech won 49-41 on Feb. 1 in a game in which both teams converted just 16 field goals apiece. The Yellow Jackets held the Lady Tigers to only four points over the final 10 minutes of the first half to enter the locker room with a commanding 43-15 lead. Georgia Tech registered only two turnovers and held Clemson to zero second-chance points.

Clemson picked up its offense in the second half but were still outscored by the Yellow Jackets, 46-39. Tech shot 59 percent from the field and outrebounded the Lady Tigers, 19-11, in the final 20 minutes. Clemson will play its regular season finale on Thursday night as they Lady Tigers travel to Raleigh, NC for a date with NC State.