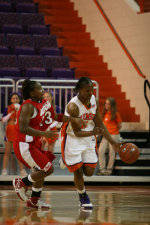 CLEMSON, SC – The Clemson women’s basketball team suffered its first ACC loss of the season on Sunday afternoon, a 63-57 decision to Georgia Tech at Littlejohn Coliseum. With the loss the Lady Tigers fell to 9-8 overall with a 1-1 record against conference foes. The win bettered the Yellow Jackets’ record to 10-5 on the year and 1-1 in the league.

“We fell flat in the second half,” Clemson Head Coach Cristy McKinney said. “We did that against Wake Forest, but we couldn’t get away with it against an athletic Georgia Tech team.”

D’Lesha Lloyd posted 18 points in the effort to extend her double-figure scoring streak to 13 games and also led the Lady Tigers with eight rebounds. Freshman Lele Hardy scored a team-high 19 points, one shy of her career best, while pulling down six boards.

Georgia Tech’s Stephanie Higgs led all scorers with 24 points, thanks in large part to an 11-for-11 afternoon at the foul line, and Chioma Nnamaka added 21 points for the Yellow Jackets. Kentrina Wilson recorded a team-best nine rebounds in the game.

Tasha Taylor hit a quick jumper to open the game but the scoring in the remainder of the half was sparse. Georgia Tech led 5-4 at the 17:37 mark and then went up 7-4 after a three-minute drought by both teams. A Lloyd jumper tied the game at seven apiece with 14:00 remaining and the Lady Tigers extended the lead to six points at 15-9 on another Lloyd basket at the 11:37 mark.

The Yellow Jackets put together an 8-2 run to knot the score at 17-17 with 4:49 in the half and then took a 22-19 lead as Higgs drained a three-pointer from the wing. Hardy responded with a three on the other end of the floor and a basket underneath by Christy Brown gave the advantage back to Clemson at the 1:39 mark. The Lady Tigers then led, 26-24, at the break.

Georgia Tech opened the second half on another 8-2 run to take a four-point lead in the game that it never surrendered. The Yellow Jacket lead grew to as many as nine points as Nnamaka hit a jumper at the 7:08 mark for the 52-43 advantage. The Lady Tigers fought back, outscoring Tech, 11-4, in the next 5:24 to cut the deficit to two points. Lloyd had four points during the run while Hardy completed a three-point play with 1:44 on the clock to make the score 56-54.

However, the Yellow Jackets converted their free throws down the stretch to seal the victory.

Clemson will return to action on Thursday night as the second-ranked North Carolina Tar Heels travel to town. The game is scheduled to begin at 7:00 pm from Littlejohn Coliseum.