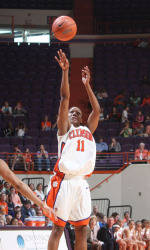 The game was the regular season finale for Clemson, which dropped its fifth straight to fall to 13-16 on the year and 2-12 in conference play.

NC State won for the fourth time in its last five games and sits at 13-15 overall and 5-8 against ACC opponents.

Holston went for 24 points and recorded a double-double with 10 rebounds on Thursday. She shot 10-for-14 from the field and added a pair of blocked shots. Senior Shayla Fields also scored in double figures for the Wolfpack, now under the leadership of Stephanie Glance, with 16 points and set a career best with seven assists.

Lele Hardy was the Lady Tigers’ leading scorer with eight points. The junior from Spartanburg, SC also had a team-high eight rebounds and tallied four assists with a pair of steals.

“In the second half, we started playing with a little fight, but once we started missing shots, we couldn’t handle the adversity. We have to find a way to play with confidence heading into the ACC Tournament.”

NC State scored the first eight points of the game and went on to lead by a 30-14 margin at the half. Hardy scored Clemson’s first point of the night with a free throw at the 14:13 mark but the Wolfpack held the Lady Tigers without a field goal until Shaniqua Pauldo’s basket with 12:56 remaining.

With the score then 18-9 in favor of the home team, NC State went on a 10-0 run in a five-minute stretch. Fields had five of the Wolfpack’s points during the run with back-to-back baskets and converted the foul shot on one of the plays. Hardy finally scored a field with less than two seconds remaining in the half. She forced a steal on the defensive end and then drove the length of the court for the layup and the foul. She drained the free throw to cut the deficit to 16 going into the lockerroom.

Clemson cut NC State’s lead to nine at 42-33 as Raleigh native Bryelle Smith knocked down a three-pointer from at least two feet behind the line. However, the Wolfpack responded with another 10-0 run and the Lady Tigers never recovered. The lead reached as many as 28 in the final minutes before Christy Brown scored Clemson’s final points with 38 seconds remaining.

The Lady Tigers will now await their seeding for the 2009 ACC Tournament, which will be released by the Atlantic Coast Conference on Sunday night.