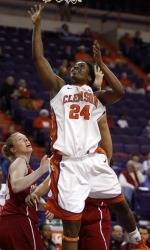 Clemson Women’s Basketball Back in Action Sunday in Littlejohn

CLEMSON, SC – The Clemson Lady Tigers will go for their 350th all-time win in Littlejohn Coliseum when they take on the Presbyterian College Blue Hose (2-4) on Sunday at 2:00 pm in Littlejohn. Clemson looks to improve to 6-2 on the season.

The meeting will be the third all-time between the two schools, with Clemson taking wins in 1985 and 2008.

The game will be scout day. All boy or girl scouts in uniform will gain admission free, and their parents can buy a general admission ticket for $3.00.

The Tigers play their final game of a five-game homestand, and will try to improve to 6-1 at home on the season. The Tigers break for finals following the game, and will return to action with a trip to Alabama to take on UAB and Samford.

Promotions: Scout Day – All scout in uniform gain free admission and their parent get in for $3.00

* Head Coach Itoro Coleman returned to the sidelines on Nov. 23 against Furman after missing the first four games

* Coleman is in her first season as a head coach. The 2000 graduate of Clemson was most recently at Penn State

* Defensively, Clemson has held five opponents to 57 or fewer points this season, a feat they accomplished only four times all of last season

* Senior Sthefany Thomas leads the team in scoring at 14.1 ppg, and has scored in double-figures in six of the first seven games

* Freshman Kelia Shelton pulled down 13 boards against SC State, setting a career-high, after finishing just a rebound shy of her first career-double-double in the previous game. The freshman has started the last 4 games

* Kirstyn Wright (12.1 ppg) are both averaging career-bests in scoring