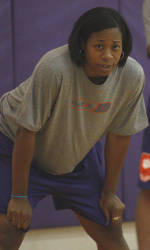 CLEMSON, SC – Following the announcement of the ACC schedule by the conference on Wednesday, Clemson Head Coach Itoro Coleman announced Clemson’s 2010-11 slate. Clemson will play 16 home games, including seven of the first eight.

“I am very excited about the season,” said Coleman. “I think we’re going to be fun to watch because we’re going to compete for 40 minutes. I am happy that out of the first eight games, seven are at home, so we have a chance to have a nice crowd to help cheer us on.”

The Tigers will play 12 teams who made postseason play, including Final Four participant Baylor, as well as NIT runner-up Miami.

“Twelve teams we play this year made it to the postseason, so I am pleased with how competitive the schedule is. I’m looking forward to going to battle with these girls. They have been working very hard in individuals and in the weight room, and we’re going to be very fun to watch.”

The Lady Tigers open the season on Friday, Nov. 12 with UNC Greensboro at 5:30 pm as part of a doubleheader with the men’s team, who opens with Western Carolina at 8:00 p.m.

The team then plays Charleston Southern, the first of five teams from the state on the schedule, on Nov. 14 before traveling to South Carolina on Nov. 18. The Tigers defeated the Gamecocks in overtime last season.

Clemson then plays five straight games at home, highlighted by the ACC/Big Ten Challenge against Indiana on Dec. 2 at 7:00 pm. Kennesaw State, Furman, S.C. State, and Presbyterian are also a part of that homestand.

Following a Jan. 3 game with North Carolina A&T, the Tigers will open conference play at NC State on Jan. 6. They then play three of the next four at home, hosting Georgia Tech, and traveling to Miami on Jan. 14 for an 8:30 contest, which will be televised live.

They will then take on Maryland and Florida State at home before going on the road for three of the next four, at Wake Forest and Duke, sandwiching a home game with Virginia, and then traveling to Chestnut Hill, MA for a Feb. 6 game with Boston College. The Tigers then welcome the Tar Heels on Feb. 10 and will host a televised contest on Valentine’s Day against Virginia Tech at 7:00 p.m.

The Tigers close the regular season with a road trip to Georgia Tech, a home game with Wake Forest, and a game in Tallahassee with the Seminoles on Feb. 27 at 2:00 p.m.

The ACC Tournament will be held from March 3-6 at the Greensboro Coliseum.

The Tigers were 12-19 a season ago, 4-12 in league play, and played a remarkable 17 postseason teams, including National Champion UConn. Twenty-one of Clemson’s 31 games were against teams who made the NIT or NCAA Tournament. Included in that number were wins over NC State, Miami, and Hofstra.