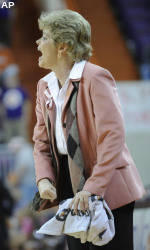 CLEMSON, SC (ClemsonTigers.com) – Head Coach Cristy McKinney, in conjunction with the Atlantic Coast Conference, announced the 2009-10 Women’s basketball schedule on Friday. The Tigers will play three games on television, and play 14 teams who participated in postseason a season ago, including the defending National Champions.

The staff has negotiated a difficult slate in preparation for conference play. The highlight of the schedule is a Thanksgiving trip to Storrs, Conn., where the Tigers will hook up with Richmond, Hofstra, and the defending National Champion UCONN Huskies in the WBCA Classic. Early road tilts with College of Charleston and Kennesaw State dot the schedule. The team will travel to Northwestern for the ACC/Big 10 Challenge in a rematch of Clemson’s 78-75 overtime win in 2008-09.

The Tigers have two home double-headers with the men’s team, including the season opener against Furman on Nov. 13, when the women play at 5:30 pm with the men to follow. They will also play host to Charleston Southern on Dec. 6 following the men’s game against South Carolina.

The home nonconference schedule is highlighted by games against South Carolina on Nov. 19, Georgia on Dec. 28, and Georgetown on Dec. 30. Clemson will also host several schools located in South Carolina in Anderson University in an exhibition on Nov. 2, USC-Upstate on Dec. 15, and Wofford on Dec. 21. The final tune-ups before conference play include road games at Ohio University and at Charlotte.

After braving a tough out-of-conference schedule, the Tigers should be hardened to begin play in the nation’s top conference. Nine of the Tigers’ opponents were in the field of 64 for the NCAA tournament a season ago, while five more participated in the WNIT. That means 14 of Clemson’s 26 opponents participated in some form of postseason play, making it one of the top schedules in the preseason. From Dec. 28 until Jan. 29, the team will play nine consecutive games against postseason participants.

The Lady Tigers first ACC opponent is Duke, who will come to Clemson on Jan. 7. Three out of the Tigers’ next six games will be televised – Jan. 11 at Georgia Tech, Jan. 22 at North Carolina, and Jan. 29 at home against Boston College. The ACC boasts six NCAA tournament participants from last season, against whom the Tigers will play eight games in conference. The Tigers play four consecutive games against NCAA teams to start the ACC schedule.

Clemson will open February with a game at Virginia on the 4th before hosting Georgia Tech on Feb. 8. They then play consecutive road games at Florida State and Maryland, the latter of which falls on Valentine’s Day. The Tigers close out the regular season hosting Miami before traveling to Virginia Tech, and hosting Wake Forest for Senior Day.

The ACC Tournament takes place at the Greensboro Coliseum in Greensboro, NC from Mar. 4-7.