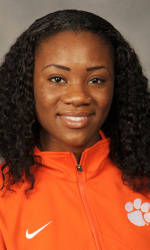 NAMPA, ID – Brianna Rollins and Bridgette Owens finished second and third, respectively, in the 60 hurdles to lead the Clemson women’s team to a fifth-place tie at the NCAA Indoor Track & Field Championships on Saturday at Idaho Center Arena. Oregon claimed its third consecutive indoor national championship in women’s track & field. The Ducks finished the meet with 49 points, followed by Kansas (30), LSU (27) and Texas (25). The Tigers had 24 points, tied with Arkansas and Texas A&M. It was Clemson’s best NCAA indoor finish since a third-place effort in 2001.

“It was a little bittersweet for us this weekend,” said Lawrence Johnson, Clemson’s Director of Track & Field. “We had some miscues that cost us, but the kids competed as hard as they could. You hope to be on the better side of things when you get to the national championship meet. We’re a little disappointed because we would have liked to have been on the podium as champions, but we’re very excited for the future.”

Rollins equaled her personal best (7.93) in the 60 hurdles final after finishing runner-up. The defending NCAA champion in the event, she recovered from a bit of a slow start but ran out of time in the end. Owens, who had the best NCAA performance of her young career, took bronze with a time of 8.03. It was the first time the Clemson women’s program produced two of the top three finishers in the same event since Tina Krebs and Kristi Voldness ran first and third, respectively, in the 1500 meters at the 1985 indoor meet.

Marlena Wesh took home fifth place in her second trip to the NCAA Indoor Championships, an improvement of eighth from last season. The junior got out in front after 200 meters, but faded as eventual winner Diamond Dixon of Kansas passed her in the final 200 to claim the trophy. Wesh’s fifth-place effort (53.17) was the best-ever by a Clemson female in the quarter mile.

Dezerea Bryant was sixth in the 60-meter dash final as a freshman. The Wisconsin native had a time of 7.28, a day after finishing seventh in the 200 meters. She is the first student-athlete in Clemson women’s track & field history to compete in both finals of those two particular sprints at the same meet.

Jasmine Brunson finished eighth in the women’s triple jump in her first NCAA indoor appearance, her second straight national championship meet dating to the 2011 outdoor season. The ACC indoor champ hit a top jump of 41’1.75″/12.83m on the third attempt of the preliminary round, but did not improve on her best in the three jumps in the finals. It is the third straight year a different Clemson female scored in the triple jump.

Spencer Adams placed fifth in a fast, competitive men’s 60 hurdles final. The red-shirt junior from Charlotte, NC had a time of 7.60, a personal best, from lane eight to match Duane Ross’ school record established in 1995. Adams came on strong at the finish and was just six one-hundredths of a second off the winning time posted by Syracuse sprinter Jarret Eaton. Adams’ fifth-place finish was the best by a Clemson male since Todd Matthews was fourth in 2002.

The official list of indoor All-Americans as recognized by the U.S. Track & Field and Cross Country Coaches Association will be released in the next two days.