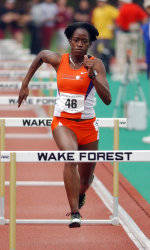 Atlanta, GA – Patricia Mamona earned All-ACC honors in the long jump Friday to highlight day two of action for the women’s track & field team at the ACC Outdoor Championships. Clemson is sixth in the team standings heading into Saturday, the final day of competition. Virginia Tech leads with 72 points. The Lady Tigers have accumulated 25.5 points.

Mamona earned her second All-ACC certificate of the 2007-08 season in the long jump. She finished third in the event at the league indoor meet in February, and again Friday at the conference’s outdoor competition. She posted an outdoor-best mark of 19’10.25″, which qualifies her for the East Region Championships in the event as well. It gives Mamona five all-conference accolades in just two years with the program, and she has a great shot at a sixth honor Saturday in the triple jump.

Polly Hardy made the finals for the 100m hurdles. The senior from Anderson, SC posted a career-best time at 13.56 in the second prelim. She will be one of eight competing for the league championship in the event Saturday at 2:05 PM. Krystal Barringer was 13th overall with a time of 14.25, as she was forced to run against a strong head wind.

Barringer was a scorer for the Lady Tigers in the long jump with a sixth-place finish. Normally a high hurdler, the Charlotte, NC native displayed her versatility after posting a jump of 18’9.75″ into a stiff wind. Nakeisha Wineglass (17’1.5″) was 10th in the long jump.

Anastasia Wilson improved on her outdoor best in the high jump with a clearance of 5’7.75″, which was good enough to tie for fourth place Friday. The sophomore moved into fourth place on Clemson’s all-time outdoor performance list with her effort. Katie Farnan also competed in the high jump and cleared a personal best 5’5.25″.

The Lady Tigers return to action Saturday to wrap up the three-day competition. Clemson’s first event will be the discus throw at 1:00 PM. The first running event is the 4x100m relay, scheduled for 1:15. The action can be followed on www.flashresults.com and a recap will be shown following the meet on ACC Select.