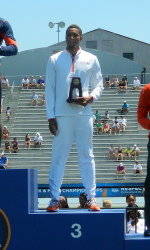 DES MOINES, IA – In a carbon copy of indoor season, Clemson’s Brianna Rollins and Bridgette Owens took second and third, respectively, in the women’s high hurdles Saturday at the NCAA Outdoor Championships. Combined with a bronze medal performance out of the 4×100 relay, the Clemson women compiled 28 points. Due to a lane violation and disqualification of Kansas in the final event, the 4×4, the Tigers and Jayhawks tied for fourth place. It was Clemson’s best team finish at the NCAA Outdoor Championships, and the best by any athletic team at Clemson since baseball finished fourth in 2010.

“It means a great deal to our program,” said Lawrence Johnson, Clemson’s Director of Track & Field. “There were some incredible performances this week across the board. To be a trophy team at what will probably go down as one of the most competitive championships ever, is a rewarding experience.”

Rollins took home her second silver medal of the collegiate track & field season after clocking a time of 12.91 into a significant headwind in the final of the high hurdles. She was the indoor runner-up and has now finished first or second in the high hurdles in her last three NCAA national meet appearances.

“Overall, I believe I executed a good race,” Rollins said. “It wasn’t as good as my prelim, but I’m pretty satisfied with how I ran into a strong wind.”

Owens collected a second straight bronze medal in the high hurdles, following up on her NCAA indoor performance. She posted a time of 13.10 in Saturday’s final, her first at the outdoor nationals.

“It felt good, better than my prelim actually, but we had a lot of wind in our faces,” Adams said. “I gave it everything I had. Third place isn’t what I wanted, but I’ll definitely take it.”

The 4×100-meter relay took the bronze medal behind a solid time of 43.52. The team consisted of Stormy Kendrick, Marlena Wesh, Dezerea Bryant and Jasmine Edgerson. A junior that has been a mainstay on each of Clemson’s past three All-America relays, Edgerson brought it home after taking the baton in fifth place out of the curve.

“I thought Stormy got out well, and Marlena ran well through a headwind to get a clean pass to Dezerea,” Edgerson said. “Then, I just tried to use my speed to bring it home for us.”

“It was a tough year for me individually,” added Kendrick, who was out for two months due to injury but returned to bolster the relay. “But, I’m so proud of these ladies!”

April Sinkler was sixth in the triple jump, her second career All-America performance in that event. Faced with two fouls and a final preliminary attempt, Sinkler unleashed a personal best 44’4″ to finish fifth in the first flight. She did not improve in the finals after sitting out the action for over an hour due to the second flight of jumpers.

“I had the mindset on the third jump to put a mark out there,” she said. “I’ve been in that position a lot this year, unfortunately. I knew I had a mark in me, I just had to stay positive after that foul on the second attempt.”