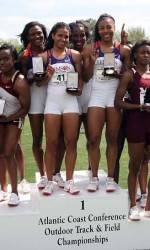 CLEMSON, SC – For the first time in school history, Clemson’s women’s track & field team finished off an indoor-outdoor conference championship sweep on Saturday at the Rock Norman Complex.  The Tigers, who won the indoor meet by a 52.5 point victory margin in February, eclipsed that with a 53-point margin over second place Florida State this weekend.  It was the third ACC Outdoor Championship in women’s program history.  The men’s team finished fifth in the standings, while Florida State won the team title on that side.

“I’m excited about getting this trophy because it was a total team effort,” said Lawrence Johnson, Clemson’s Director of Track & Field.  “The women came out here and competed without the likes of ACC Freshman of the Year, Brianna Rollins, who was out with an injury.  We knew we wouldn’t be as strong in some areas, but we knew we needed to come together.  Some people that didn’t score indoors stepped up and scored for us this weekend.  The kids really wanted to put on a show for the home crowd, and I think they did it in fine fashion.”

Clemson produced three individual champions and one relay champion over the course of the three-day meet.  Leading the way once again for the Tiger program was April Sinkler, who won her second event of the weekend on Saturday.  She put a wrap on another impressive meet by taking her sixth individual ACC championship in the women’s high jump.  The red-shirt sophomore from Stafford, VA cleared 5’11.25” – an outdoor school record – on her first attempt to hold off a pair of competitors that later cleared the same height.  Sinkler now owns three career ACC championships in the high jump, two indoor and one outdoor.

“I was feeling confident with the high jump from the practice sessions we’ve had recently,” Sinkler said.  “But at first I was a little nervous, because I haven’t competed in the high jump since NCAA indoor nationals.  I’m glad everything worked out, and that the team did such a great job competing for one another this weekend.”

The women’s 4x100m relay took home its first ACC crown since the 2001 season.  Clemson’s group of Michaylin Golladay, Stormy Kendrick, Kristine Scott and Jasmine Edgerson posted a time of 44.32 into swirling wind conditions.  Kendrick and Scott broke the event open for the Tigers, who held off Florida State and Virginia Tech over the home stretch.  The men’s 4×1 team of Charlton Rolle, Miller Moss, Warren Fraser and Spencer Adams took third with a time of 40.71.

Kendrick produced a pair of runner-up finishes in the short sprints for the women’s team.  She broke a school record with a time of 11.25 in the 100m dash, and then followed about an hour later with a wind-aided time of 22.83.  One of the real surprises Saturday came in the women’s quarter mile, where freshman Brittany Pringley was runner-up in the event after posting a time of 53.72.  It was her first-ever individual all-conference accolade.

Spencer Adams earned a pair of All-ACC accolades for the men’s squad in his first-ever outdoor conference meet.  He placed third in both the 110m hurdles and 400m hurdles.  He had a time of 13.88 in the high hurdles, and then produced a personal collegiate best with a time of 52.14.

Golladay was fourth in the women’s high hurdles after a wind-aided time of 13.17.  Golladay also scored in the 200m dash after posting a time of 23.47 and a finish of sixth place.  She finished out the afternoon by running third leg for the fourth-place 4x400m relay.  The rest of the team – Pringley, Edgerson and Sonni Austin – combined for a time of 3:39.81.

Kim Ruck capped an excellent weekend with her second All-ACC honor.  She finished in third place in a competitive 5K with a time of 16:38.05.  Ruck previously finished runner-up in the 10K on Thursday.

Sinker placed fourth in the triple jump with a top mark of 42’11”, improving on her outdoor personal best in the event.  Nakeisha Wineglass had an outstanding final, as the senior from Alexandria, VA popped a mark of 42’9” in windy conditions to take home fifth place.

Zach Berg established a school record in the men’s hammer throw and earned his second career All-ACC honor in the event as well.  The graduate student from Tega Cay, SC recorded a mark of 208’3”, breaking his tie for first place with former Tiger great Matt Helinski.  Berg finishes his career with four all-conference honors, including two indoors in the 35-pound weight throw.  Teammate Alex Padgett was fifth.  He also broke the previous school record with a personal best throw of 207’5”.

In the women’s hammer throw, freshman Brittney Waller earned All-ACC honors with a third-place finish.  The product of J.L. Mann High School in nearby Greenville, SC had a personal best throw of 170’10”.

Xavier Tromp of France was runner-up in the men’s pole vault, but he broke his own school record in the process.  He cleared 18’0.5” and fell just short in what turned out to be quite a duel with Virginia Tech’s Yavgeniy Olhovsky.  Clemson’s Chris Spear tied for fourth Saturday, with a clearance of 16’10.75”.

Caroline Kennedy and Amy Morrison tied for third place in the women’s vault, with both earning All-ACC honors.  Both made it in dramatic fashion by clearing 12’9.5” with their third and final attempt at the height.  It was Morrison’s first career all-conference honor, and the second in Kennedy’s career.