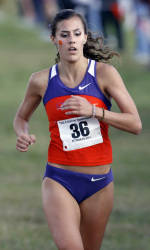 LOUISVILLE, KY – The Clemson women’s cross country team finished fourth at the NCAA Southeast Regional Championships on Saturday, the program’s highest finish at a regional meet since the 1993 squad placed third. The Tigers were just 14 points behind North Carolina and will now await word on a potential at-large NCAA bid. Clemson’s women have not advanced to the NCAA Cross Country Championships since that 1993 season. The NCAA is expected to announce the 30-team field on Sunday by 8:00 PM.

Virginia won the women’s team race with 117 points, followed by NC State with 113. North Carolina had 133 points to Clemson’s 147. The Tigers entered the meet with a No. 4 regional ranking, so they held down their spot against a competitive field on Saturday.

Three runners received all-region honors on Saturday, including a pair of seniors from the women’s team in Alyssa Kulik and Kim Ruck. It was the second straight season both were named to the all-region squad. Kulik finished in eighth place, her best showing of the season. She posted a time of 20:34.3 over the 6,000-meter course at E.P. “Tom” Sawyer Park.

For Kulik, it was a personal best and put her into contention for an NCAA individual bid, should the team not make the field.

Clemson’s No. 3 runner Saturday was Natalie Anthony, a sophomore out of Randolph, NJ. She was just two spots shy of earning all-region status. The 27th-place finish was easily her most impressive performance to date in what has been a much improved second year for Anthony. She ran a time of 21:05.9, also a personal best.

Kate Borowicz and Cara Talty, another set of sophomores, were the final two scorers for the Tiger team on Saturday. Borowicz was 43rd with a time of 21:33.2, followed immediately by Talty at 21:33.7. For Talty, a transfer from Seattle, it was the culmination of a season’s worth of improvement each time out.

Clemson’s men finished 17th as a team, but sophomore Ty McCormack was stellar with an 18th-place finish. He had a time of 30:38.0 over Louisville’s 10K course and improved by 17 spots over last season’s regional finish. He was Clemson’s first all-region performer in men’s cross country since Matt Clark in 2007. He also was All-ACC this year, ending a terrific all-around season for the Gainesville, GA native.

Aaron Ramirez stepped up in a big way for the Tigers on Saturday. The red-shirt freshman from the Greenville, SC area finished in 70th place and was the team’s No. 2 runner. He clocked a time of 31:58.4 over the 10,000-meter distance. Jonathan Sunde was third in 86th place, with a time of 32:16.9. The final two scorers for the men’s squad Saturday were Martin Maloney (112th) and James Dwyer (141st).