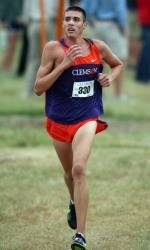 SOUTH BEND, IN – The Clemson cross country teams fought rugged conditions on Friday at the Notre Dame Invitational, with the women claiming a seventh-place finish and the men a 22nd-place mark. The women’s team, which received five votes in the latest coaches’ poll, actually finished one spot ahead of No. 22-ranked Princeton. The Tigers were just 12 points out of sixth place, a spot held by BYU. Florida State’s women won the event.

The women’s team overcame a poor start at the 5,000-meter Notre Dame Golf Course layout. The team’s top four finishers all placed between 23rd and 52nd in the individual standings, with a 29-second split between the runners. The top performer on the afternoon was once again senior Alyssa Kulik, a native of Simpsonville. She followed up her season-opening fourth-place effort at the Clemson Invitational two weeks ago with a 23rd-place run Friday. Her 5K time was 17:32, just shy of a personal best despite the wet, muddy conditions.

Clemson’s No. 2 position changed hands Friday. Kate Borowicz, the team’s third-best runner in her Clemson debut two weeks ago, was 30th overall in the individual race Friday with a time of 17:38. Kim Ruck, who was the team’s second-best performer at the Clemson Invitational, came across the finish line in 50th place at 17:50.

Ruck was one second ahead of Natalie Anthony, who finished 52nd. Anthony continued her strong early-season push with a strong sprint in the race’s final stages. The team’s final scorer on Friday was red-shirt sophomore Elyse Borisko. She put together a time of 18:18 and was 112th in the running order out of 225 entries.

The men’s team also suffered from a slow start on Friday. The team’s best runner, Ty McCormack, was 150th overall at the mile mark before making his move toward the front. He recovered quite well, as he went on to post a time of 24:48 over the 8,000-meter distance and come across the finish line in 32nd place overall.

The next closest finisher for the Tigers was Aaron Ramirez in 127th place. He had a time of 25:47 in the biggest meet of his young career. Jonathan Sunde, a senior, was No. 3 on the Tigers’ board with a 141st-place finish and time of 25:56. The final two scorers for the men’s team were sophomore Nathan Hendershot, a native of the Hoosier State, and freshman James Dwyer.

BYU won the men’s race in convincing fashion, living up to its top-five national ranking coming into the meet. The Cougars amassed 46 points, far ahead of second-place Florida State (93).

The teams return to action in two weeks for another challenging competition in the Midwest, the Wisconsin Invitational. The meet is scheduled for Saturday, Oct. 15.