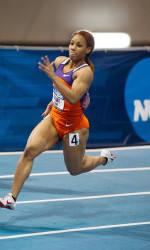 TUCSON, AZ – Warren Fraser won both men’s short sprints and April Sinkler won the women’s triple jump Saturday, part of eight total victories for the Tiger track & field program at the Jim Click Shootout. The Clemson women’s team, rated No. 4 nationally entering the event, finished second in the scored team meet to host Arizona. The Wildcats had a total of 162 points to Clemson’s 145. The Tiger men’s team finished fifth with 95.66 points, a third of a point shy of tying California and Penn State for third place.

Sinkler was impressive in the triple jump, winning for a second consecutive meet. She had a mark of 43’8.5″, which came on her sixth and final attempt of the afternoon. She held off teammate Jasmine Brunson, who was second at 41’9.25″.

Fraser topped a field of nine in the men’s 100 dash. The junior from the Bahamas had a time of 10.54, edging senior teammate Justin Murdock by a mere hundredth of a second. He then followed with a season-best 20.85 in the 200-meter dash to again top the field.

The women’s 4×100-meter relay won for the second consecutive week. This time, the team of La’Mont Jackson, Fraser, Roberson and Murdock combined to a time of 3:11.21, a season-best for the Tigers. The women’s 4×4 was third place Saturday.

Rollins was second in the women’s 100 hurdles, trailing NCAA indoor champion Christine Manning. The Miami, FL native bested the school record with a time of 12.78. Owens, third at the NCAA indoor nationals in the high hurdles, clocked a 12.88 and was fourth Saturday. Monique Gracia (13.32) was sixth for the Tigers.

Spencer Adams won the men’s 400 hurdles with a personal best. The red-shirt junior had a time of 51.43, eighth-best in Clemson history. Adams was also runner-up (13.73) in the men’s 110 hurdles, leading three straight Tiger finishers in the event. Charlton Rolle (13.87) was third, followed by Marcus Maxey (13.94) in fourth.

Lauren Terstappen responded from a tough meet a week ago to post a personal best en route to a win in the pole vault. The sophomore from Phoenixville, PA jumped 13’4″/4.07m and bested a field of eight competitors.

Sinkler was runner-up in the women’s long jump Saturday. She hit a top leap of 19’8.75″ on her fifth attempt, her second of the final round. Jameel Abdul-Mateen was fourth in the men’s long jump, connecting on a mark of 24’1.75″.

Shai Carpenter was the third-place finisher in the men’s triple jump. Just a freshman out of nearby Mauldin, SC, he jumped 51’3.75″ on the afternoon. His mark places him fifth in the school’s outdoor record books for the event.

Karine Farias placed fifth in the women’s javelin. She had a throw of 123’11”, while teammate Whitney Fountain was eighth (109’11”) as the two multi-event athletes gear up for the heptathlon in the upcoming conference championship meet.

The Tiger program returns to action next weekend in Gainesville, FL. Clemson will compete in the Pepsi Florida Relays, its final tuneup prior to the ACC Outdoor Championships on April 19-21.