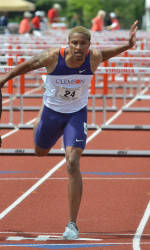 CHARLOTTESVILLE, VA – Clemson won six individual events and both relays Saturday to clinch its third consecutive indoor/outdoor sweep of the ACC women’s track & field championships. Dezerea Bryant won two individual sprints, while Marlena Wesh won the 400 in record fashion and contributed to both relay victories at Lannigan Field. The women won by an 85-point margin over runner-up Virginia, the largest point differential since 1994 at the ACC outdoor meet.

“This feels brand new every time, it never gets old,” said Director of Track & Field Lawrence Johnson. “I can go on forever winning championships. Dezerea and Marlena had some terrific performances from start to finish. The value they bring is unmatched. We were dead set on winning every sprint available on the track, and I think we did. I couldn’t ask for any more out of the group.”

Bryant produced a meet record in her 100-meter dash win. The Milwaukee, WI native had a time of 11.29 – third-best in Clemson history. She had to hold off teammate Marlena Wesh in the 200, but did so with a personal best 23.05. Bryant swept all ACC short sprints as a freshman in 2012, as she won both indoors as well.

Wesh’s ACC record time of 51.43 in the 400-meter dash was a personal highlight for the native of Virginia Beach, VA. The ACC’s Most Valuable Track Performer also charged in the final meters of the 200, finishing runner-up to Bryant by a mere hundredth of a second to earn all-conference recognition.

The women’s 4×1 won for a third consecutive year. The team of Bridgette Owens, Wesh, Bryant and Jasmine Edgerson compiled a time of 43.58 in a dominating performance. Edgerson, the common link to all three victorious 4×1 relays, was also runner-up to Bryant in the 100-meter dash. The 4×400 relay team of Nia Fluker, Brittany Pringley, Keni Harrison and Wesh recorded a season-best 3:33.68 and came back to win in grand style after North Carolina took the lead early in the third leg.

“Keni just kept coming and coming,” Johnson said. “I’m very impressed with how she handled herself at these championships.”

April Sinkler won the high jump, her eighth career ACC crown, and was runner-up in the triple jump. She cleared the high jump bar at 5’11.5″ to give her three consecutive ACC titles in the outdoor event. She then jumped 43’5″ in the triple jump to cap a 26-point scoring weekend for the Tigers. Sinkler concluded her career with 14 All-ACC performances, third-most in school history.

Sinkler was named the ACC’s Most Valuable Field Performer for the sixth time in her decorated career. She also became the first athlete since former Georgia Tech star Chaunte Howard to win three ACC outdoor high jump titles in a career.

“April has had an outstanding career in her time at Clemson,” Johnson said. “To see her perform at a high level in a short weekend was phenomenal. She has the ability to step up and make it happen, she’s a tremendous competitor. She has not high jump trained a day this calendar year. But we decided to at the last minute, and she said, `Sure!’ She found an approach she liked and for her to win was tremendous.”

The Clemson men’s team finished in fifth place for the second time in 2012. The Tigers were also fifth at the indoor league meet in February. Virginia Tech won its first ACC outdoor championship in men’s track & field to upset the favorite Florida State.

Spencer Adams was the top performer for the men’s team at the ACC Championships, earning runner-up finishes in both hurdle events Saturday. He set personal bests in both, running 13.39 in the 110 hurdles before recording a time of 50.96 in the 400 hurdles. Marcus Maxey was also all-conference for the Tigers in the high hurdles, earning the accolade for a second straight season. He had a time of 13.83, just ahead of Charlton Rolle (13.91) who was fourth.

“Spencer stepped his game up this week and really came through,” Johnson said. “A week ago I really was on him about being a leader. But he focused in more than I’ve seen in a long time and performed really well this weekend.”

Chris Slate and Aaron Ramirez were impressive Saturday in the middle distance for the men’s team. Slate, a senior out of Delaware, earned his fourth all-conference accolade in the 800 meters with a career-best time of 1:48.30. His time is No. 4 in Clemson history. Ramirez was fourth in the 1500 meters with a personal best, as his 3:44.97 puts him 10th in the Tiger record books.

The 4×400-meter relay team of Jaron Roberson, Murdock, Fraser and Adams combined to a time of 3:10.80, a season-best for the Tigers. The group finished fourth place overall.

Shai Carpenter placed fourth in the men’s triple jump with another personal best. The Clemson freshman record-holder hit a jump of 15.75m/51’8.25″ on his sixth and final attempt of the afternoon.