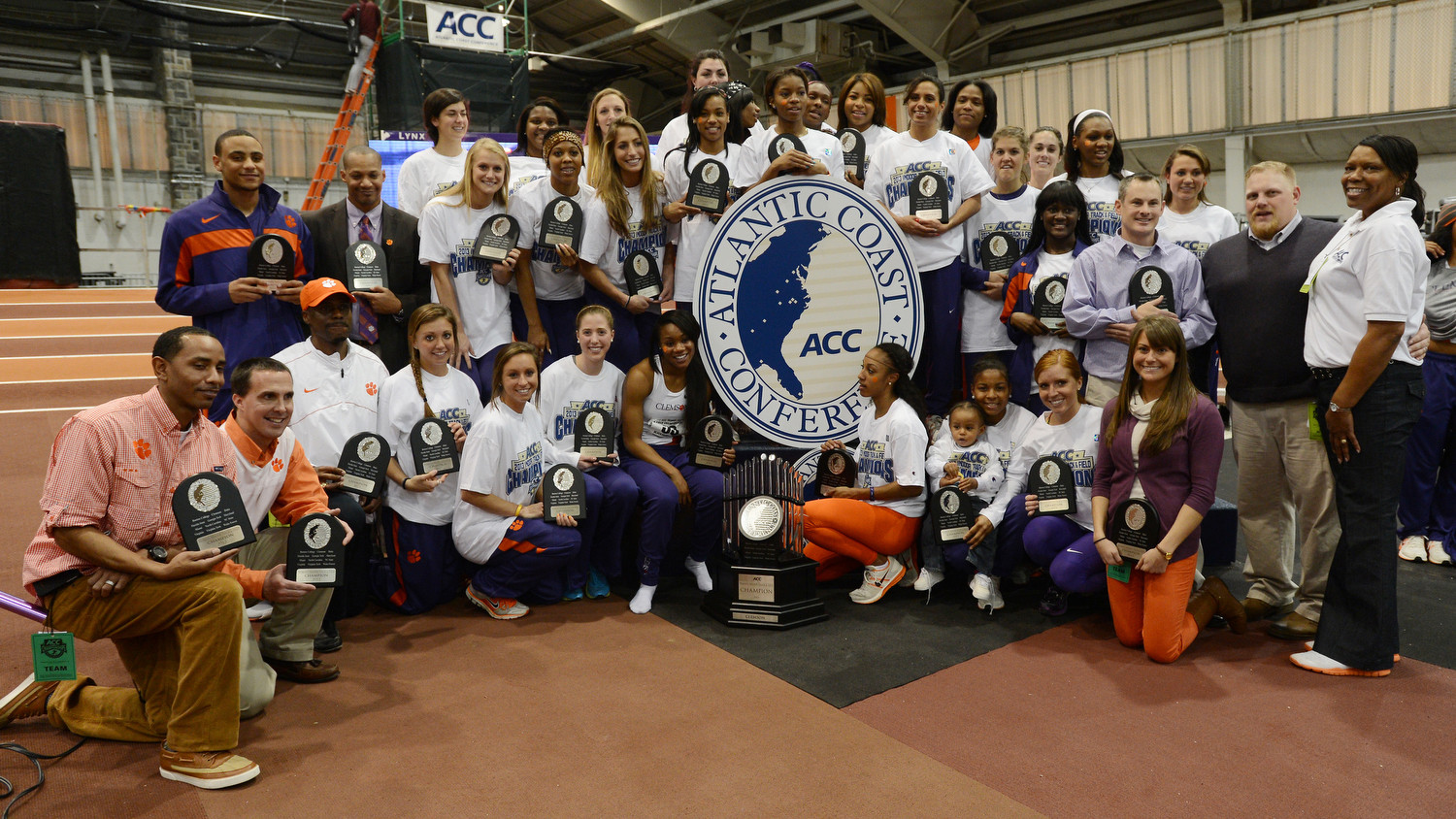 CLEMSON, SC – Clemson women’s track & field won its fourth consecutive ACC Indoor Championship on Saturday, defeating runner-up Florida State by a 41.5-point margin at Virginia Tech’s Rector Field House in Blacksburg, VA.  The Tiger women became the first to win four straight ACC indoor crowns since North Carolina from 1998-2001.  Clemson’s men were third, its best finish since 2008.  Virginia Tech won the men’s title. The Clemson women, winners of seven straight ACC championship meets overall, finished with a total of five individual gold medals and the 4×400 relay.  The men won two events and the 4×4. “I’m extremely proud of both teams for the way they performed throughout the ACC Championships,” said Interim Director of Track & Field Shawn Cobey.  “Our seniors set the tone on both sides.  The women’s seniors were driven and determined that they were leaving with four straight ACC indoor titles.  It’s something they’ll look back on and remember for the rest of their lives.  The men’s seniors really took ownership of this program, and now we have an identity.  They compete with heart, and know they have the talent to be in that upper echelon like we showed.” Behind the strength of Most Valuable Track Performer Dezerea Bryant’s second straight short sprint sweep, the Tigers filled the podium across the board of Saturday’s running finals.  Bryant clocked a 7.27 in the 60 final and season-best 23.22 in the 200.  Stormy Kendrick was runner-up in the 60 (7.33) and third in the 200 (23.64), season bests in both.  Kendrick now has 14 all-conference honors in her career.  Only Clemson Hall of Famers Kim Graham and Jamine Moton had more in a Tiger uniform. Wesh earned a third straight ACC title in the 400 dash.  The senior out of the commonwealth of Virginia posted a season-best 52.84 to cruise to the victory.  She is the first ACC female to win three straight in the quarter mile since North Carolina’s Monique Hennagan from 1996-98.  Keni Harrison took bronze with a personal best 53.82 – tied for fifth place in Clemson’s record books. Wesh ran second leg for the 4×4, teaming with (in order) Harrison, Nnenya Hailey and Nia Fluker for a season-best time of 3:36.12.  It was the Tigers’ fourth straight 4×4 gold medal at the ACC Indoor Championships. In the men’s 400, senior Brunson Miller became the first Tiger gold medalist since Otto Spain in 2003 when he crossed the finish line with a personal best 46.49.  His time is No. 3 in Clemson history.  Miller provided more excitement in the final event, when he took the baton in third place but pulled the Tigers into the lead heading into the final straightaway.  He hung on and the Tigers ran a time of 3:11.36 to win their second 4×4 in the last three years at the ACC indoor meet.  He teamed with La’Mont Jackson, Spencer Adams and Ryan Mangone to claim the win.  It was Mangone’s first ever ACC title. Rollins cruised to a second straight ACC title in the 60 hurdles, clocking a meet record 7.90 in the final to lead a 1-2-4 Tiger finish.  Harrison was runner-up with a personal best 8.13, while freshman Hailey took fourth in 8.50.  Rollins then took to the track for the 200, where she earned the silver medal with a time of 23.36. Adams won the gold in the men’s 60 hurdles, also for a second straight year.  Clemson’s red-shirt senior also produced an ACC Championships record with a time of 7.68 on Saturday.  He is the first Tiger male to win the event back-to-back since Sultan Tucker did in 1999 and 2000. Tevin Hester had an outstanding meet as a freshman, earning the bronze medal in the 60 dash and a fourth-place showing in the 200.  He ran 6.64 in the 60, tied for the sixth-best time in school history.  In the 200, Reggie Lewis was fifth and Miller took home sixth. Marcus Maxey and Harrison were runner-up performers in the hurdles.  Maxey ran a time of 7.83 in the men’s final, while Harrison was clocked at a personal best 8.13 in the women’s final.  Harrison’s time is No. 3 on the Tigers’ all-time performance chart. In the men’s 3K, Ty McCormack ran a personal best and scored in his second event of the weekend.  He produced a time of 8:13.13 and actually led a few laps at the midway point of the race before taking sixth place. Jasmine Brunson earned all-conference status for the second straight year in the triple jump, finishing runner-up with a season-best mark of 42’7.5”.  Mimi Land added a point with a leap of 40’10.25”. Marcus Brown took the silver in the men’s shot put, an event that yielded 13 points for the Tigers as Cory Thalheimer was fourth place.  Brown had a personal best mark of 57’6.25”, while Thalheimer connected on a throw of 56’0”. Final Women’s Standings 1. Clemson, 141.5 2. Florida State, 100 3. Duke, 82 Final Men’s Standings 1. Virginia Tech, 153 2. Florida State, 135 3. Clemson, 91 Most Valuable Performer Dezerea Bryant – Women’s Track Clemson’s ACC Champions Dezerea Bryant – Women’s 60 Dash, 200 Dash Brunson Miller – Men’s 400 Dash Marlena Wesh – Women’s 400 Dash Spencer Adams – Men’s 60 Hurdles Brianna Rollins – Women’s 60 Hurdles Jackson, Adams, Mangone, Miller – Men’s 4×400 Relay Harrison, Wesh, Hailey, Fluker – Women’s 4×400 Relay Brittney Waller – Women’s Weight Throw Clemson’s All-ACC Performers Tevin Hester – Men’s 60 Dash Stormy Kendrick – Women’s 60 Dash, 200 Dash Brianna Rollins – Women’s 200 Dash Marcus Maxey – Men’s 60 Hurdles Keni Harrison – Women’s 60 Hurdles, 400 Dash Lauren Terstappen – Women’s Pole Vault Mimi Land – Women’s Long Jump Jasmine Brunson – Women’s Triple Jump Marcus Brown – Men’s Shot Put