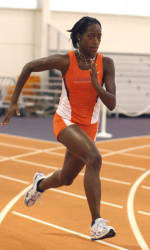 Hardy posted a season-best tie of 8.41 in the high hurdle prelims, just two tenths shy of a personal best in the event. She went on to finish fifth in the finals of the event. Krystal Barringer was sixth with a time of 8.65.

Barringer had the best time in the 60m dash among Clemson’s entries. She had a time of 7.85 and just missed qualifying for the finals. Linda Buchholz (8.58), a multi-event athlete, also competed in the 60m dash Saturday. The 4x400m relay team was 13th overall on Saturday after posting a time of 4:06.11.

Anastasia Wilson was runner-up in the high jump with a clearance of 5’6″. It matched a personal best indoor clearance for the sophomore, which is also the fifth-best mark in school history. Kendra Gauntlett finished seventh in the high jump, as she cleared 5’4.25″.

Allison Lake competed in the shot put and recorded a distance of 36’7.5″.

The women’s team will return to action next weekend to take part in the Clemson Invitational on January 18-19 at the school’s indoor facility.