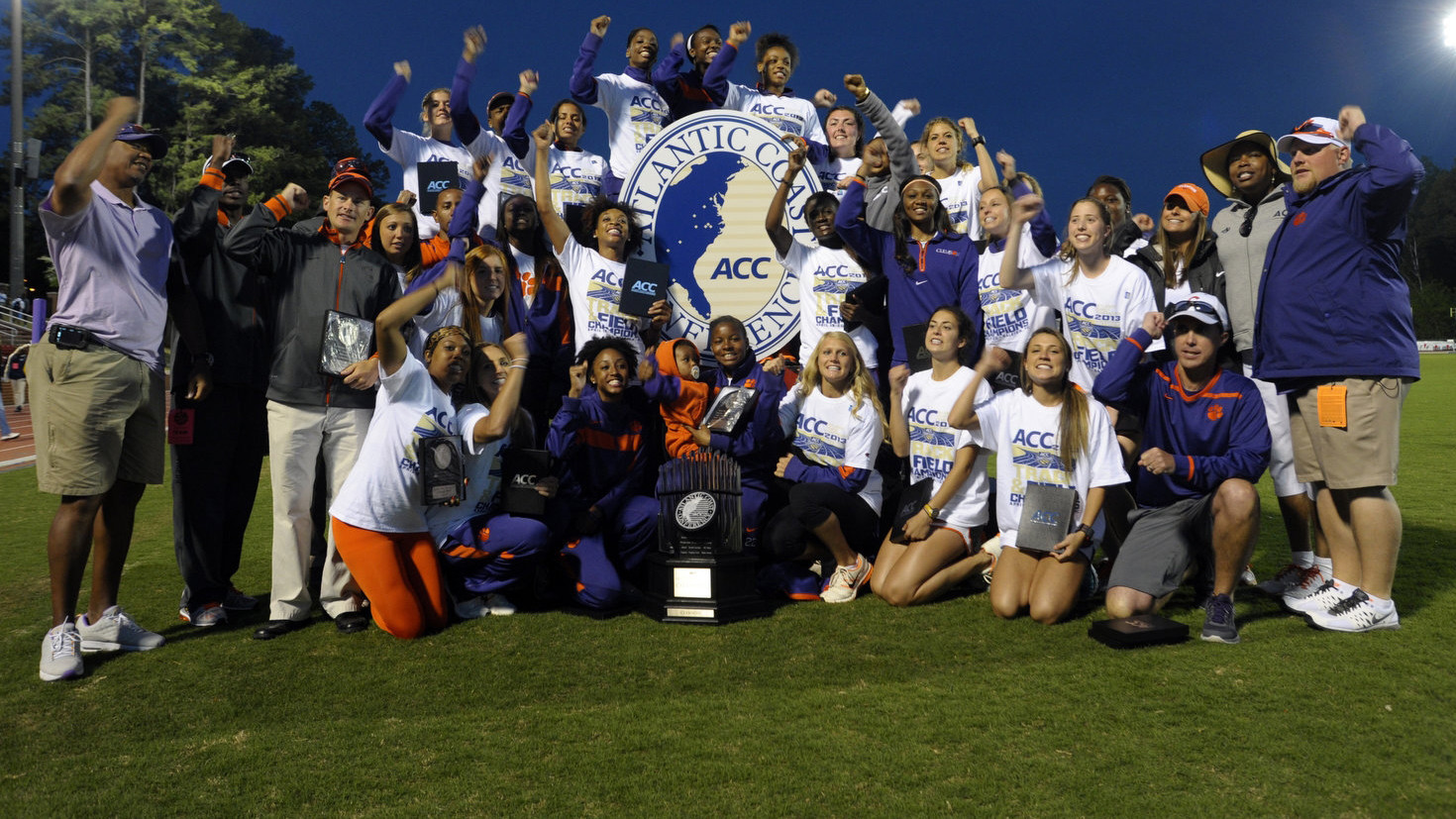 RALEIGH, NC – Clemson broke a tie in the final event of the evening on its way to a fourth straight ACC women’s outdoor track & field title Saturday, the program’s eighth straight league crown overall. The Tigers won the final event in a head-to-head showdown against Florida State to claim the trophy.”I’m so proud of our team – especially our seniors – for fighting all week long,” said Interim Director of Track & Field Shawn Cobey. “It came down the 4×4, and our girls just wanted it more. For our seniors, it doesn’t get any better than this. Eight ACC titles and they never lost one.”The Tiger women finished the meet with 151 points to Florida State’s 146. On the men’s side, Clemson placed third – its best finish since the 2008 team was runner-up. The Tigers edged UNC by one point in the final men’s standings.After Natalie Anthony earned two crucial points in the 5K two days after a grueling 10K, the stage was set with the Tigers and Seminoles tied for the top position. But there was little doubt once the 4×4 began who was going to be champion. Keni Harrison had a great lead leg, and Keisha Richburg, Brittany Pringley and Nia Fluker followed suit to propel Clemson to a win in 3:34.87.Harrison received the ACC Most Valuable Track Performer award in front of many family and friends, as she grew up only about 45 minutes from North Carolina’s capital city. Harrison scored 38 out of a possible 40 points, winning two relays and an individual event. Brianna Rollins supported with wins in the 100 hurdles and 200 dash, and helped the 4×1 to victory as well.Rollins and Harrison finished 1-2 in the 100 hurdles. The Miami senior posted a time of 12.87 into a stiff headwind, finishing ahead of teammate Harrison, who won the silver. Rollins returned for the 200 a couple of hours later and sizzled to a time of 23.04, holding off teammate Dezerea Bryant at the line. Rollins is the first ACC female to win both the 100 hurdles and 200 dash at the same meet since 1997

Harrison earned a repeat gold medal performance in the 400 hurdles.  The sophomore turned in a personal best 56.58, breaking the school record for the event.

Dezerea Bryant won the 100 dash with a time of 11.42, her second straight victory in the event at the ACC Championships. Bryant’s loss to Rollins in the 200 final was her first in eight individual short sprint competitions at the ACC Indoor and Outdoor Championships. Stormy Kendrick was runner-up in the 100 before withdrawing from the 200 final.The women’s 4×1 claimed its fourth straight ACC crown in the event, and was just off the meet record with a time of 43.59. The group was composed of Harrison, Rollins, Kendrick and Bryant.Tevin Hester took bronze in both short sprints, the 100 and 200. He ran a personal best 10.22 in the 100 dash and followed about an hour later with a time of 20.90. Reggie Lewis bagged top-five finishes in both events as well for the men.Spencer Adams followed in the men’s 110 hurdles with a gold medal performance, clocking a 13.70 despite a -2.2 headwind. Marcus Maxey was second place. Maxey added a second All-ACC honor of the day in the 400 hurdles, clocking a time of 52.48 Saturday.Brunson Miller was silver medalist in the 400 dash after posting a solid time of 46.08. He later anchored the men to a runner-up performance in the 4×400 relay alongside Adams, Michael Smith and Justin Johnson. Fluker earned her first individual all-conference nod after finishing fourth in the women’s race, posting a time of 53.37. Brittney Waller collected her second All-ACC honor of the weekend after earning the silver medal in the hammer throw. She fouled the first two attempts, but managed a legal mark on the third and final try. She eventually threw 187’2″.Shai Carpenter and Jameel Abdul-Mateen took fourth and fifth in the men’s triple jump, scoring nine big points for the Tigers. Carpenter had missed the last two months due to injury. Torian ware, another sophomore, took fourth place in the men’s high jump with a 7’0.25″ clearance. In the women’s triple jump, senior Jasmine Brunson was fourth after hitting a mark of 41’10.5″.Final Men’s Standings1. Florida State, 1492. Virginia Tech, 1383. Clemson, 114