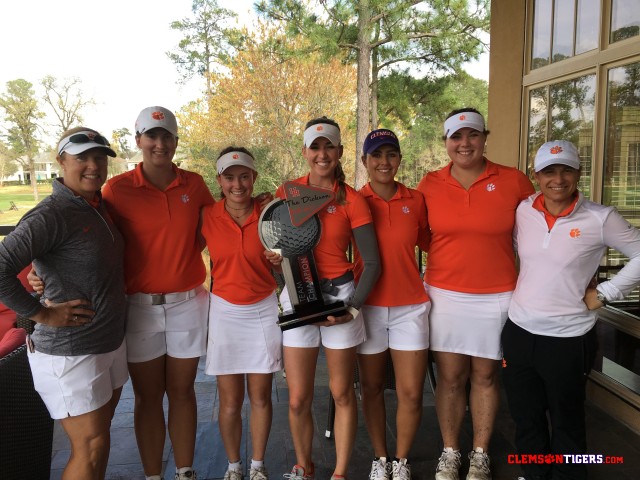 Clemson, S.C.—Sophomore Kennedy Swann shot a career best tying three-under-par 69, and Sydney Legacy and Ana Paula Valdes both had one-under-par scores of 71 to lead Clemson to victory at The Houston-Dickson women’s college golf tournament at The Woodlands Country Club in The Woodlands, Texas.

The first two rounds of the tournament scheduled for Monday were rained out, reducing the event to 18 holes on Tuesday. Clemson won the tournament with a five-under-par team score of 283, five shots ahead of Purdue.

It was the second tournament victory in the five years of Clemson women’s golf. Kelley Hester’s team won the UCF Challenge last year.

“Our ladies did a great job of staying in the present,” said Hester.  “They took it one shot at a time and that was important.  I am very proud of them, it was a team effort with everyone at par or better.  We are a talented group and we are capable of doing great things when we avoid big numbers.  We didn’t have any doubles from the five all day.”

Swann, a native of Austin, Texas, led the way with her score of 69. She had five birdies, including four on the back-nine when she shot 32. She tied for second in the field of 90 golfers, the best finish of her Clemson career.

Valdes and Legacy also both had five birdies in firing rounds of 71.   Valdes got off to a rough start with three bogeys on the front side, but she registered birdies on holes nine, 11 and 12 to get to two-under-par before finishing at one under.   Both ladies tied for sixth individually.

Marisa Messana and Alice Hewson both finished with even-par rounds of 72.   Messana had three birdies and three bogeys during her 100th career round as a Clemson golfer. It was her third round of exactly even par. Hewson, Clemson’s top stroke average golfer entering the tournament, had consecutive birdies on holes 15 and 16 to get to one –under before making a bogey on the final hole. Messana and Hewson both finished tied for 14th.

Clemson’s next tournament will be at the Sun Trust Gator Invitational at the University of Florida, March 10-11.