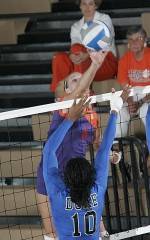 CLEMSON, SC – The Clemson volleyball team won its second consecutive match after losing the first game with a 3-1 victory over the Duke Blue Devils on Friday, Sept. 23. With the win, the Tigers improve to 7-3 overall and 2-0 in ACC play. Duke falls to 6-3 and 0-1 in the conference.

Tiger Jeannette Abbott led all hitters with 22 kills, while Brittany Ross added 16. The team continued its’ blocking flair, recording 14 total team blocks in the match to bring the season total to 99. Carrie DeMange had a team-high 21 kills for the Blue Devils with a .444 hitting percentage.

“I am so proud of how hard we fought this weekend,” Clemson Head Coach Jolene Jordan Hoover exclaimed. “These were two important home victories for ACC standings against two very good teams.”

Duke edged the Tigers in the first game by a score of 30-28, but Clemson responded, winning the next three for the match. The Tigers trailed the Blue Devils early in the second game, 7-1, and were behind for much of the game. They were able to tie the score at 23-23 and took the lead at 26-25. Duke tied the score again at 28 apiece, but Clemson pulled out the win, 31-29.

Abbott scored the final point for the Tigers in the third game with one of her 22 kills, as Clemson took a 2-1 lead in the match. The Blue Devils were not defeated easily, however, as the fourth game was hard-fought as well. Clemson again managed to secure the game victory and claimed the match on a kill by setter Courtney Lawrence.

The Tigers return to action next Friday, Sept. 30 as they travel to Miami, FL to face the Hurricanes in a 7:00 PM match. Clemson will then face the Florida State Seminoles in Tallahassee, FL on Sunday, Oct. 2 at 1:00 PM.