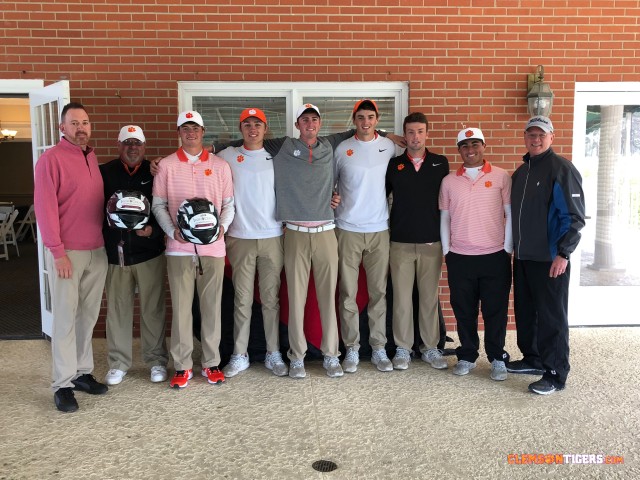 Clemson, S.C.—Turk Pettit won medalist honors by three shots, Kyle Cottam joined him in the top 10 and Colby Patton turned in the best round on Sunday as Clemson won the Irish Creek Intercollegiate in Kannapolis, NC by two shots.   The Tigers won the event with a score of seven-over-par 859, two shots ahead of North Florida and eight shots ahead of fourth-ranked Georgia Tech.

Clemson won the tournament without US Amateur Champion Doc Redman, who had the tournament off to play in the Masters. It was the team’s second win this year and 76th of Larry Penley’s career.

The entire tournament was played in difficult playing conditions, including Sunday when the teams teed off in 34 degree temperatures and 15 mile per hour wins. “I am proud of the guys because this was as cold as I have ever been on a golf course,” said Larry Penley, who has been Clemson’s head coach since the 1983-84 season.

“We needed to play in some adversity as we come down the home stretch of the season. I was really impressed with the way we just battled in difficult conditions. “

Penley was proud of his freshmen, especially Pettit, who won his first collegiate tournament. “Turk had a really good ball strike day. He drove the ball well and that is something you have to do on this course, especially with it being so wet. All the freshmen handled it well. Colby Patton led us with a consistent 72 and that was a great score today.”

“I have never been this cold on a golf course,” said Pettit. “Yesterday it seemed to rain all day. It was good to see us play well in such conditions and it gives us confidence heading into next week (the Clemson Invitational) and the ACC Tournament in two weeks. That is the big one.”

Clemson’s top three players for the 54 holes were freshmen. Pettit finished first with a 209 score, four under par, three shots ahead of his nearest competitor. It was his fourth top three finish this year, including each of his last three events. He is 20-under-par for his last three tournaments.

Cottam struggled on Sunday with a 78, but he still recorded an eighth-place finish with a 216 total of the 54 holes. He shot an opening round 68. Patton finished 12th with a 217 total and his 72 in the final round was the best of the day in the final round.

Bryson Nimmer shot a 75 on Sunday and finished with a 221 score, good enough for 30th place. William Nottingham had a final round 74 and finished 39th with a 223 score.

The key to Clemson for the tournament was performance on par-four holes. Clemson played the par fours at 15 over par, seven shots better than any other team. Clemson also led the tournament in birdies with 44.