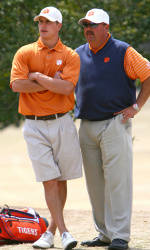 Greenville, SC – Ben Martin shot a 69 to win co-medalist honors, leading Clemson to the championship of the Furman Invitational on Sunday. Clemson fired a team score of six under par 282 in rainy conditions on the par 72 course to defeat Chattanooga by 14 shots. Clemson finished with a three-day score of one over par 865. Chattanooga was the second at 879 and Furman was third at 893.

It was Clemson’s first win of the season and first time the Tigers have won the Furman Invitational since 1993. It was the fourth overall Furman Invitational title for the Tigers, who also won in 1983, 1992 and 1993. Martin’s co-championship was the first medalist honor for a Clemson golfer at Furman since Mark Swygert was the medalist in a playoff in 1992.

It was also Martin’s first career win. He was the runnerup at the US Amateur last August and will compete in the Masters in four weeks. He spent Monday and Tuesday of this past week practicing at Augusta National.

The victory was the 60th career win for Clemson Head Coach Larry Penley, who ranks second in ACC history in total tournament wins behind former Wake Forest Head Coach Jesse Haddock, who won 83 with the Demon Deacons from 1962-89. It was also Clemson’s first win in an in-state tournament since 1993 when Clemson won the Palmetto Invitational.

It was also a come back win for the Tigers, who trailed Chattanooga by three shots entering the final round.

Martin’s win combined with the Clemson team win marked the first time since the 2002 NCAA East Regional that Clemson won the team title and had an individual champion in the same tournament. That year D.J. Trahan won medalist honors at the regional, helping the Tigers win the team title.

“It feels good to win,” said Penley. “We had been close this year in many tournaments, but it is good to get over the hump and win one. It means a lot from a confidence standpoint that this team can win. And the way we won was important. We were tied with Chattanooga with six holes left. Then we just went out and took it.”

The two teams were tied at two over par for the tournament with six holes left. But, Clemson did not let the rainy weather bother them and beat Chattanooga by 14 shots over the last six holes.

Five Clemson golfers finished in the top 10 of the individual standings. Martin had rounds of 70-71-69 to tie Steven Fox of Chattanooga for individual honors at 210. Mills, whose 67 on Sunday was the low individual round of the year by a Clemson golfer, finished at 215 to finish third.

Freshman Crawford Reeves played as an individual at the Furman Invitational and finished fourth with an even par 216. He had a 70 in the difficult conditions on Sunday.

Luke Hopkins finished in a tie for eighth place with 54 hole scores of 220. Burger had an even par 72 on Sunday, while Hopkins had a 74. Hopkins’s round included an eagle on the first hole when he knocked his second shot in the cup from 106 yards out.

McCuen Elmore finished with a 74 on Sunday and was at 237 for the tournament.

Two other Clemson individuals played at the Furman Invitational. Mike Muscatell played his first career event for the Tigers and finished with a 221 score, good enough for 14th place. Alex Boyd had a 228 for the three rounds and finished tied for 42nd.

Clemson returns to action March 28-30 when it will compete in The Hootie at Bulls Bay in Mount Pleasant, SC.